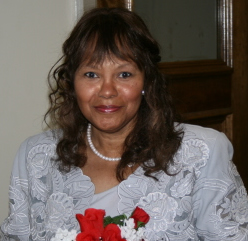 nza in North Carolina, U.S.A. . Barbara was born Barbara Ann Alston in Baltimore, U.S.A. in 1943, the daughter of Ethel Alston and John Westry and moved as a child with her mother to New York. After entering talent shows at school, her uncle Benny Wells, a former big-band musician, offered to help her to form a group. With her friends Mary and Myrna on board, Wells recruited Dee Dee Kenniebrew, aged 15, and Patsy Wright, 17, whose baby niece Crystal provided the group "The Crystals" with its name.
With some reluctance Alston agreed to be the lead singer. "My uncle said he needed background singers. That's why I agreed," she said. "I could do harmony by ear and loved making up dance routines. That was my forte. But everyone else at the time was too shy to give the lead a shot."
They were rehearsing in New York's Brill Building when Spector put his head round the door and offered to produce them. Within months the Crystals were in the Top 20 and on stage at the Apollo Theatre in Harlem.
Despite a string of hit records over the next three years, tensions mounted between the group and Spector, who was spending increasing amounts of his time on the Ronettes. After a 1964 tour of Britain — where Then He Kissed Me reached No 2 — the Crystals broke with the producer and by the end of the year Alston had left the group. She moved to Charlotte, North Carolina, where she raised four children — Tony, Kenneth, Donielle and Kemberley — and worked for an insurance company.
The Crystals were allegedly not paid by Spector for several of their hits. LaLa Brooks, who joined the line-up as a co-lead singer in 1963, recalled them making regular phone calls to his office to demand the royalty cheques that had been promised and being "fluffed off". Lacking the funds for the legal fees, she said they were unable to sue.
Alston did not seem overly concerned. According to her daughter Donielle she spent her later years contentedly singing her hits while doing chores. "We used to kid her about her past," she said. "The Supremes went with Berry Gordy and the Crystals went with Phil Spector. I used to joke that if the Crystals had picked Berry Gordy she could have been Diana Ross."
It seemed entirely appropriate that when Barbara Alston recorded her first hit with the Crystals she was wearing her high-school prom dress.
The New York-based all-girl group had been summoned to a recording session by the producer Phil Spector, but it was the evening of

the graduation dance at William H Maxwell Vocational School, where 17-year-old Alston was a pupil along with her fellow Crystals, Mary Thomas and Myrna Girard.
The session was rescheduled to take place after the prom, and later that night, without changing, the three girls took the subway from Brooklyn to meet Spector in a Manhattan studio, where they recorded their debut Top 20 hit, There's No Other (Like My Baby). It was Spector's first hit on his own label.
The prom dresses served as a perfect emblem of the innocent spirit that the Crystals personified, played out in songs such as Da Doo Ron Ron and Then He Kissed Me. Even the nod to youthful insubordination on their No 1 hit He's a Rebel — credited to the Crystals, but sung without acknowledgment by Darlene Love — was rendered safe by the reassuring line that "he's always good to me, always treats me tenderly".
Alston and the Crystals became one of the biggest-selling female acts in the US, in an era of groups including the Shirelles, the Supremes and the Ronettes, another of Spector's acts.
By the mid-1960s the vogue for such groups was passing as the "girls" grew up, got married and left showbusiness. At the time their style might have seemed to represent the most ephemeral kind of pop, but it has had an enduring influence on artists such as Adele. Amy Winehouse said the Crystals' song He Hit Me (And It Felt Like a Kiss) was one of her favourites and cited it as an influence on her Grammy- winning album Back to Black.
The song, which told the story of a woman who believed that being abused by a partner was a sign of his love, featured one of Alston's finest performances. However, when it was released in 1962 the single understandably caused outrage and was withdrawn. Carole King, who wrote it and was herself a victim of domestic violence, admitted it had been a "mistake", but Spector, who produced the record, seemed to find nothing unsettling in its brutality.
"It was absolutely, positively the one record that none of us liked," Alston said. "We argued with Phil about releasing it. Why would five young girls sing something like, 'He hit me and it felt like a kiss'? 'Yuk,' was what I truly felt." Yet she felt powerless to resist Spector's manipulation. "Phil was a master at getting you in the mood for whatever song he was attempting," she said. "He really had to do a job on me for that one."


song: 'Then He Kissed Me' by The Crystals