Doris Day died aged ninety-seven on 13th May 2019 from pneumonia. Her death was announced by her charity, the Doris Doris Day Animal 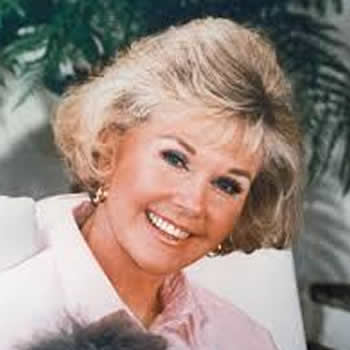 Foundation. Doris had been divorced from all her four husbands and was survived by her grandson, Ryan.

part in a three-day party in her hometown of Carmel, California, in late March. The event is also a fundraiser for her Animal Foundation. In 2019, during the event, there was a special screening of her 1959 film 'Pillow Talk' to celebrate its 60th anniversary. About the film Doris Day stated in the same interview that she "had such fun working with my pal, Rock. We laughed our way through three films we made together and remained great friends. I miss him."
Doris Day's interest in animal welfare and related issues seemingly dates to her teenage years. While recovering from an automobile accident, she took her dog Tiny for a walk without a leash. Tiny ran into the street and was killed by a passing car. Doris Day later expressed guilt and loneliness about Tiny's untimely death. In 1971, she co-founded Actors and Others for Animals, and appeared in a series of newspaper advertisements denouncing the wearing of fur, alongside Mary Tyler Moore, Angie Dickinson, and Jayne Meadows.
In 1978, Doris Day founded the Doris Day Pet Foundation, now the Doris Doris Day Animal Foundation (DDAF). A non-profit grant-giving public charity, DDAF funds other non-profit causes throughout the America that share DDAF's mission of helping animals and the people who love them. The DDAF continues to operate independently.
To complement the Doris Doris Day Animal Foundation, Doris Day formed the Doris Day Animal League (DDAL) in 1987, a national non-profit citizen's lobbying organization whose mission is to reduce pain and suffering and protect animals through legislative initiatives. Doris Day actively lobbied the United States Congress in support of legislation designed to safeguard animal welfare on a number of occasions and in 1995 she originated the annual Spay Doris Day USA. The DDAL merged into The Humane Society of the United States (HSUS) in 2006. The HSUS now manages World Spay Doris Day, the annual one-day spay/neuter event that Doris Day originated.
A facility bearing her name, the Doris Doris Day Horse Rescue and Adoption Center, which helps abused and neglected horses, opened in 2011 in Murchison, Texas, on the grounds of an animal sanctuary started by her late friend, author Cleveland Amory. Doris Day contributed two hundred and fifty thousand dollars towards the founding of the center. Doris Day was also a vegetarian.
After her retirement from films, Doris lived in Carmel-by-the-Sea, California, U.S.A. where she had many pets and adopted stray animals.

song:'Move Over Darling' by Doris Day