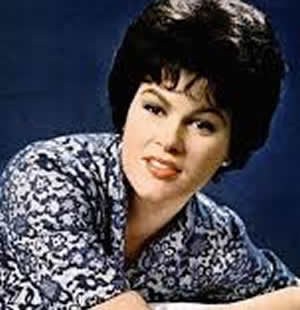 a forest outside Camden, Tennessee, U.S.A. The plane was found about 90 miles (140 km) from its Nashville destination, Forensic examination concluded that everyone aboard had been killed instantly. Until the wreckage was discovered the following dawn and reported on the radio, friends and family had not given up hope. Endless calls tied up the local telephone exchanges to such a degree that other emergency calls had trouble getting through. The lights at the destination Cornelia Fort Airpark were kept on throughout the night, as reports of the missing plane were broadcast on radio and TV.
Early in the morning, singer Roger Miller and a friend went searching for survivors. He told that as fast as he could, he ran through the woods screaming their names hrough the brush and the trees untill he came up over a rise and saw the ghastly scene. The plane had crashed nose down. Shortly after the bodies were removed, looters scavenged the area. Some of the items which were recovered were eventually donated to The Country Music Hall of Fame. Among them were Patsy Cline's wristwatch, Confederate flag cigarette lighter, studded belt and three pairs of gold lamé slippers. Patsy Cline's fee and her attire from the last performance have never been recovered.
As were her wishes, Patsy Cline's body was brought home for her memorial service, which thousands attended. She was buried at Shenandoah Memorial Park in her hometown of Winchester, Virginia, U.S.A. Her grave is marked with a bronze plaque. With the help of Loretta Lynn and Dottie West, a bell tower was erected at the cemetery in her memory, which plays hymns daily at 6:00 p.m., the hour of her death. Another memorial marks the exact place off Fire Tower Road in Fatty Bottom, Tennessee, where the plane crashed in the still-remote forest.
On 3rd March 1963, Patsy had performed a benefit at the Soldiers and Sailors Memorial Hall, Kansas City, Kansas, for the family of disc jockey "Cactus" Jack Call. He had died in an automobile crash a little over a month earlier. Call was a longtime DJ for KCKN, but had switched to KCMK a week before his death on January 25, 1963, at the age of 39. Also performing in the show were George Jones, George Riddle and The Jones Boys, Billy Walker, Dottie West, Wilma Lee and Stoney Cooper, George McCormick, the Clinch Mountain Boys as well as Cowboy Copas and Hawkshaw Hawkins.

Patsy Cline was born Virginia Patterson Hensley on 8th September 1932 in Winchester, Virginia, U.S.A. in the city's Memorial Hospital. She was the eldest child of seamstress Hilda Virginia (née Patterson, and blacksmith Samuel Lawrence Hensley . She had a brother Samuel Jr. and a sister Sylvia. The family moved often before finally settling in Winchester, Virginia when Patsy was sixteen. Sam Hensley deserted his family in 1947, but the children's home was reportedly happy nonetheless.
Patsy enrolled at John Handley High School but never attended classes. To help her mother support their family, she worked as a soda jerk at Gaunt's Drug Store and a waitress at the Triangle Diner. She watched performers through the window at the local radio station, and she asked WINC (AM) disc jockey Jimmy McCoy if she could sing on his show. Her performance in 1947 was well received and she was asked back. This led to appearances at local nightclubs wearing fringed Western outfits that her mother made from Patsy's designs.
Patsy performed in variety and talent shows in the Winchester and Tri-State areas, and she gained a large following through the shows and local radio appearances. Jimmy Dean was already a country star in 1954, and she became a regular with him on Connie B. Gay's Town and Country Jamboree radio show on WAVA (AM) in Arlington County, Virginia.
Patsy married contractor Gerald Edward Cline in 1953. The marriage ended in divorce in 1957, and there were no children from the union. The failure of their marriage was blamed on the conflict between Patsy's desire to sing professionally and Gerald's wish that she remain at home. She retained the last name professionally for the rest of her life.
Patsy married Linotype operator Charles Allen in 1957. She regarded him as "the love of her life". They had two children together: Julia, born 1958 and Allen, born 1961. Charlie was buried next to Patsy in Shenandoah Memorial Park in her hometown of Winchester, Virginia.
Bill Peer, her second manager, gave her the name Patsy, from her middle name, Patterson. Bill Peer, who had a country music band in Brunswick, MD, also had an infant daughter named Patsy, so by some accounts, that is why the young Ginny was nicknamed Patsy. In 1955 he gained a contract for her at Four Star Records, the label he was then affiliated with. Four Star was under contract to the Coral subsidiary of Decca Records. Patsy signed with Decca at her first opportunity three years later.
Her first contract allowed her to record compositions only by Four Star writers, which Patsy found limiting. Later, she expressed regret over signing with the label, but thinking that nobody else would have her, she took the deal. Her first record for Four Star was "A Church, A Courtroom & Then Good-Bye," which attracted little attention, although it led to appearances on the Grand Ole Opry. As these performances were not "records" per se, they were not governed by her contr 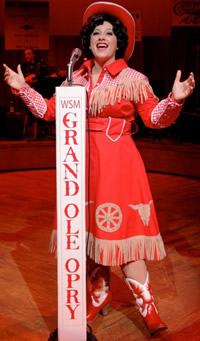 act, and she could sing what she wanted, within reason. This somewhat eased her "stifled" feeling.
Between 1955 and 1957, Patsy recorded honky tonk material, with songs like "Fingerprints," "Pick Me Up On Your Way Down," "Don't Ever Leave Me Again," and "A Stranger In My Arms." of which she co-wrote the last two.
According to Decca Records producer Owen Bradley, the Four Star compositions only hinted at Patsy's potential and he thought that her voice was best-suited for pop music, but Patsy insisted that she could only record country songs. She often rebelled, only wishing to sing country and yodel. She recorded fifty-one songs with Four Star.