Robert Calvert died aged forty-three a heart attack on 14th August 1988 in Ramsgate, Kent, United Kingdom. he was layed to rest in nearby Minster 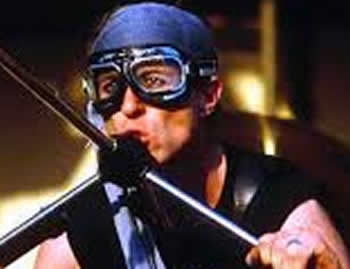 cemetary. His gravestone is engraved with the line "Love's No Time's fool", from William Shakespeare's Sonnet 116.
Robert Calvert was born in Pretoria, South Africa and moved with his parents to England when he was two years old where he attended schools in London and Margate. Having finished school he joined the Air Training Corps, where he became a corporal and played the trumpet for the 438 squadron band and then went on to college in Canterbury. After leaving college, and having been denied his childhood dream of becoming a fighter pilot, he slowly acquainted himself with the UK's bohemian scene. Robert Calvert began his career in earnest by writing poetry. In 1967 he formed the street theatre group, Street Dada Nihilismus.
At the end of the 1960s he moved to London and joined the flourishing psychedelic subculture and during that time he acquainted himself with New Wave science fiction writers; acclaimed author Michael Moorcock, winner of several science fiction literary awards and publisher of the influential New Worlds magazine, became a lifelong friend.
Robert Calvert's poems were published in New Worlds and other magazines and although he was influenced by the New Wave, he developed a distinct style of his own; his ability to change fluently between poetry, music and theatre allowed him to develop into a multimedia artist. Robert Calvert then became acquainted with Dave Brock, and became the resident poet, lyricist and frontman of Hawkwind, intermittently from 1972 to 1979.
Robert Calvert co-wrote Hawkwind's hit single "Silver Machine", which reached number three in the UK singles chart. Although Lemmy sings on the single version, this is an overdub of a live recording taken at the Roundhouse in London, with Robert Calvert on vocals. "They had tried everyone else singing it except me", Lemmy later said. Robert Calvert also directed Hawkwind's live opus, the Space Ritual Tour.
Robert Calvert suffered from bipolar disorder, which often caused a fractious relationship with his fellow musicians. At one point he was sectioned under the Mental Health Act. Despite his sometimes debilitating mental health, Robert Calvert remained a fiercely creative, driven and multi-talented artist. During periods away from Hawkwind duties, he worked on his solo career; his creative output including albums, stage plays, poetry, and a novel. Robert's first solo album, Captain Lockheed and the Starfighters, was released in 1974. The record is a concept album; an amalgam of music and theatre focused around the Lockheed bribery scandals. In 1975 Robert Calvert won the Capital Radio poetry competition with his poem "Circle Line". In 1975, musician and producer Brian Eno produced and played on Robert Calvert's second solo album, Lucky L

song: 'Hero with a Wing' by Robert Calvert