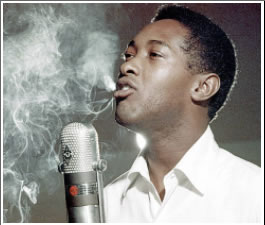 , U.S.A. Answering separate reports of a shooting and of a kidnapping at the motel, police found Sam Cooke's body, clad only in a sports jacket and shoes but no shirt, pants or underwear. He had sustained a gunshot wound to the chest, which was later determined to have pierced his heart. The motel's manager, Bertha Franklin, said she had shot Sam Cooke in self-defense after he broke into her office residence and attacked her. Her account was immediately disputed by Sam Cooke's acquaintances.
The official police record states that Franklin fatally shot Sam Cooke, who had checked in earlier that evening. Franklin claimed that Sam Cooke had broken into the manager's office-apartment in a rage, wearing nothing but a shoe and a sports coat, demanding to know the whereabouts of a woman who had accompanied him to the hotel. Franklin said the woman was not in the office and that she told Sam Cooke this, but the enraged Sam Cooke did not believe her and violently grabbed her, demanding again to know the woman's whereabouts. According to Franklin, she grappled with Sam Cooke, the two of them fell to the floor, and she then got up and ran to retrieve a gun. She said she then fired at Sam Cooke in self-defense because she feared for her life. Sam Cooke was struck once in the torso. According to Franklin, he exclaimed, "Lady, you shot me", before mounting a last charge at her. She said she beat him over his head with a broomstick before he finally fell, mortally wounded by the gunshot.
The motel's owner, claimed that she had been on the telephone with Franklin at the time of the incident. Carr claimed to have overheard Sam Cooke's intrusion and the ensuing conflict and gunshot. She called the police to request that officers go to the motel, telling them she believed a shooting had occurred.
A coroner's inquest was convened to investigate the incident. The woman who had accompanied Sam Cooke to the motel was identified as Elisa Boyer, who had also called the police that night shortly before Carr had. Boyer had called from a telephone booth near the motel, telling them she had just escaped being kidnapped.
Boyer told the police that she had first met Sam Cooke earlier that night and had spent the evening in his company. She claimed that after they left a local nightclub together, she had repeatedly requested that he take her home, but he instead took her against her will to the Hacienda Motel. She claimed that once in one of the motel's rooms, Sam Cooke physically forced her onto the bed, and that she was certain he was going to rape her. According to Boyer, when Sam Cooke stepped into the bathroom for a moment, she quickly grabbed her clothes and ran from the room. She claimed that in her haste, she had also scooped up most of Sam Cooke's clothing by mistake. She said she ran first to the manager's office and knocked on the door seeking help. However, she said that the manager took too long in responding, so, fearing Sam Cooke would soon be coming after her, she fled from the motel before the manager ever opened the door. She said she then put her clothing back on, hid Sam Cooke's clothing, went to a telephone booth, and called police.
Boyer's story is the only account of what happened between her and Sam Cooke that night; however, her story has long been called into question. Inconsistencies between her version of events and details reported by diners at Martoni's Restaurant, where Sam Cooke dined and drank earlier in the evening, suggest that Boyer may have gone willingly to the motel with Sam Cooke, then slipped out of the room with his clothing in order to rob him, rather than to escape an attempted rape. Sam Cooke was reportedly carrying much more money at Martoni's than the $108 cash found at his death scene, and Boyer was arrested for prostitution in January 1965, though the charge was dismissed and she accrued no more notoriety.
However, questions about Boyer's role were beyond the scope of the inquest, the purpose of which was only to establish the circumstances of Franklin's role in the shooting. Boyer's leaving the motel room with almost all of Sam Cooke's clothing, and the fact that tests showed Sam Cooke was inebriated at the time, provided a plausible explanation to the inquest jurors for Sam Cooke's bizarre behavior and state of dress. In addition, because Carr's testimony corroborated Franklin's version of events, and because both Boyer and Franklin later passed lie detector tests, the coroner's jury ultimately accepted Franklin's explanation and returned a verdict of justifiable homicide. ] With that verdict, authorities officially closed the case on Sam Cooke's death.
Some of Sam Cooke's family and supporters, however, have rejected Boyer's version of events, as well as those given by Franklin and Carr. They believe that there was a conspiracy to murder Sam Cooke and that the murder took place in some manner entirely different from the three official accounts. Singer Etta James viewed Sam Cooke's body before his funeral and questioned the accuracy of the official version of events. She wrote that the injuries she observed were well beyond the official account of Sam Cooke having fought Franklin alone. James wrote that Sam Cooke was so badly beaten that his head was nearly separated from his shoulders, his hands were broken and crushed, and his nose mangled. Some people speculated that Sam Cooke's manager, Allen Klein, might have had a role in his death. Klein owned Tracey, Ltd, which ultimately owned all rights to Sam Cooke's recordings.

No concrete evidence supporting a criminal conspiracy has been presented to date.
Sam Cooke was married twice. His first marriage was to singer-dancer Dolores Elizabeth Milligan Cook, who was killed in an auto accident in Fresno, California, in 1959. Although he and Dolores were divorced, Sam Cooke paid for his ex-wife's funeral expenses. Sam Cooke, had three children, Linda born 1953), Tracy born 1960), and Vincent who drowned in the family swimming pool.
Sam Cooke was born Samuel Cook in Clarksdale, Mississippi, in 1931. In 1957 he added an "e" at the end of his name to signify a new start to his life. He was the fifth of eight children of the Rev. Charles Cook, a minister in the Church of Christ , and his wife, Annie Mae.
The family moved to Chicago in 1933. Sam Cooke attended Doolittle Elementary and Wendell Phillips Academy High School in Chicago. Sam Sam Cooke began his career with his siblings in a group called the Singing Children when he was six years old. He first became known as lead singer with the Highway QC's when he was a teenager, having joined the group at the age of fourteen. During this time, Sam Cooke befriended fellow gospel singer and neighbor Lou Rawls, who sang in a rival gospel group.
In 1950, Sam Cooke replaced gospel tenor R. H. Harris as lead singer of the gospel group the Soul Stirrers, founded by Harris, who had signed with Specialty Records on behalf of the group. Their first recording under Sam Cooke's leadership was the song "Jesus Gave Me Water" in 1951. They also recorded the gospel songs "Peace in the Valley", "How Far Am I from Canaan?", "Jesus Paid the Debt" and "One More River", among many others, some of which he wrote. Sam Cooke was often credited for bringing gospel music to the attention of a younger crowd of listeners, mainly girls who would rush to the stage when the Soul Stirrers hit the stage just to get a glimpse of Sam.

song: 'Bring It On Home To Me' by Sam Cooke