Bands: The Byrds, New Riders of the Purple Sage, The Flying Burrito Brothers.

Skip Battin died aged sixty-nine from the complications of Alzheimer's 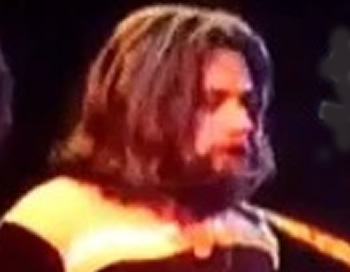 disease on 6th July, 2003 whilst in a care facility in Silverton, Marion County, Oregon, United States of America. He was survived by his wife Patricia and his sons Brent and John-Clyde and his daughter, Susanna.
Skip was born, Clyde Raybould Battin on 18th February, 1934 in Gallipolis, Ohio, USA and attended local schools, discovering the electric bass when he was seventeen years old. Skip moved to Tucson to attend physical education classes at the University of Arizona and with fellow student Gary Paxton, he formed a college band, the Pledges. As Gary and Clyde, they recorded the single "Why Not Confess" for Rev Records, a local label. In 1959, they went into the Desert Palm Studios in Phoenix, Arizona, the home of guitarist Duane Eddy, and recorded some Tom Paxton compositions. Entrepreneur Bob Shad issued the demo of the duo's song "It Was I" on his Brent label, and renamed the act as "Skip & Flip". Their song eventually made No 11 in the American charts. The follow-up, "Fancy Nancy", was a minor hit, but they charted again in 1960 with a cover of the Marvin and Johnny ballad "Cherry Pie". The novelty number "Hully Gully Cha Cha Cha", written by Tom Paxton and Skip Battin, garnered airplay but did not make the charts. A short time later, the pair disbanded.
In 1961, Skip Battin moved to California, where he got small acting parts in films and on television. In 1966, after a few years out of the music industry, he formed the short-lived folk-rock group Evergreen Blueshoes, whose one album appeared on the Amos label. After the album failed to sell, Skip Battin concentrated instead on session work for many musicians, such as Gene Vincent, Warren Zevon, and others.
Skip Battin is probably best known as bass guitarist and songwriter with the Byrds from 1970 to 1973. He was, by eight years, the eldest member of the Byrds. He recorded three albums with them and toured extensively. Many of his songwriting contributions were co-written with Kim Fowley. After the breakup of the Byrds, Skip Battin recorded a solo album called 'Skip'.
In February 1973, Skip began work on his 'Topanga Skyline' solo album. After it was completed, it was shelved for unclear reasons. Skip Battin was invited to join the country-rock group New Riders of the Purple Sage, with whom he recorded three albums from 1974 to 1976. He, however, left the group to join his ex-Byrd cohort Gene Parsons in a new line up of the Flying Burrito Brothers.
In 1984, Skip Battin got into a fight with Roger McGuinn after a live performance in London, UK, when McGuinn failed to pay wages to a line-up called the Peace Seekers. From 1989 to 1991, Skip Battin toured occasionally with Michael Clarke's Byrds, named "The Byrds featuring Michael Clarke." After Michael Clarke's death, the band continued as The Byrds Celebration, with Skip Battin the sole ex-Byrds member but he stopped touring and recording after his Alzheimer's disease had reached an advanced state