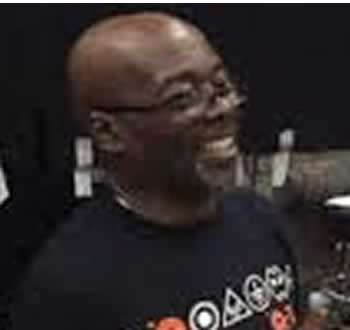 2019, after he had been diagnosed with terminal cancer earlier in the month.
Andy was born, Clifford Leon Anderson on 30th January 1951 in West Ham, East London, U.K.
Andy joined Steve Hillage's band and appeared on the two 1979 Hillage albums, Live Herald and Open. Then, after a few years as a session musician, Andy had a brief period in Hawkwind in 1983, but did not record with them.
Andy then played with the Glove on their first and only album 'Blue Sunshine'. This led to him joining the Cure later that year, when original drummer Lol Tolhurst moved to keyboards. Andy Anderson recorded on the Cure albums 'Japanese Whispers', 'The Top', and 'Concer' in addition to the singles "Love Cats" and "The Caterpillar".
Andy is credited on recordings by many other bands and artists, including (in order of release) Techno Twins, M/Robin Scott, Jimmy Pursey, Mother Gong, Jeffrey Lee Pierce, Steve Vengeance, Two-Bit Thief, The Saints, Backbeats, Martha Munizzi, Group 1 Crew, the Gun Club, Spirits Burning & Clearlight, and Beat the System, as a producer.
Andy also collaborated with many other artists including Brilliant, the Edgar Broughton Band, the Burning

song:'The Love Cats' by The Cure