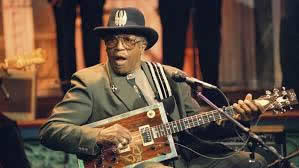 His funeral, a four-hour "homegoing" service, took place at Showers of Blessings Church in Gainesville, Florida, and kept in tune with the vibrant spirit of Bo Diddley's life and career. The many in attendance chanted "Hey Bo Diddley" as a gospel band played the legend's music. A number of notable musicians sent flowers, including George Thorogood, Tom Petty and Jerry Lee Lewis. He had been admitted to intensive care in Creighton University Medical Center in Omaha, Nebraska, following a stroke after a concert the previous day in Council Bluffs, Iowa. Starting the show, he had complained that he did not feel well. He referred to smoke from the wildfires that were ravaging south Georgia and blowing south to the area near his home in Archer, Florida. Nonetheless, he delivered an energetic performance to an enthusiastic crowd. The next day, as he was heading back home, he seemed dazed and confused at the airport; 911 and airport security were called, and he was immediately taken by ambulance to Creighton University Medical Center and admitted to the intensive care unit, where he stayed for several days. After tests, it was confirmed that he had suffered a stroke. Bo Diddley had a history of hypertension and diabetes, and the stroke affected the left side of his brain, causing receptive and expressive aphasia.
While recovering from the stroke and heart attack, Bo Diddley came back to his hometown of McComb, Mississippi, in early November 2007, for the unveiling of a plaque devoted to him on the Mississippi Blues Trail. This marked his achievements and noted that he was "acclaimed as a founder of rock-and-roll." He was not supposed to perform, but as he listened to the music of local musician Jesse Robinson, who sang a song written for this occasion; Robinson sensed that Diddley wanted to perform and handed him a microphone, the only time that he performed publicly after his stroke.
Bo Diddley was born on December 30th 1928 in Mississippi, U.S.A. as Ellas Otha Bates. He was adopted and raised by his mother's cousin, Gussie McDaniel, whose surname he assumed. In 1934, the McDaniel family moved to the South Side of Chicago, where he dropped the Otha and became Ellas McDaniel. Bo Diddley was an active member of Chicago's Ebenezer Baptist Church, where he studied the trombone and the violin, becoming so proficient on the violin that the musical director invited him to join the orchestra. He performed until he was eighteen but was more interested in the pulsating, rhythmic music he heard at a local Pentecostal church and took up the guitar.
Inspired by a performance by John Lee Hooker, Bo supplemented his income as a carpenter and mechanic by playing on street corners with friends, including Jerome Green in the Hipsters band, later renamed the Langley Avenue Jive Cats. During the summers of 1943 and 1944, Bo played at the Maxwell Street market in a band with Earl Hooker. By 1951 he was playing on the street with backing from Roosevelt Jackson on washtub bass and Jody Williams, whom he had taught to play the guitar.
In 1951 Bo landed a regular spot at the 708 Club, on Chicago's South Side, with a repertoire influenced by Louis Jordan, John Lee Hooker, and Muddy Waters. In late 1954, he teamed up with the harmonica player Billy Boy Arnold, the drummer Clifton James and the bass player Roosevelt Jackson and recorded demos of "I'm a Man" and "Bo Diddley". They re-recorded the songs at Chess Studios, with a backing ensemble comprising Otis Spann, Lester Davenport (harmonica), Frank Kirkland (drums), and Jerome Green (maracas). The record was released in March 1955, and the A-side, "Bo Diddley", became a number one R&B hit.
The origin of the stage name 'Bo Diddley' is unclear. Bo claimed that his peers gave him the name, which he suspected was an insult. He also said that the name first belonged to a singer his adoptive mother knew. Harmonicist Billy Boy Arnold said that it was a local comedian's name, which Leonard Chess adopted as Bo's stage name and the title of his first single.
A diddley bow is a homemade single-string instrument played mainly by farm workers in the South. It probably has influences from the West African coast. In the American slang term bo diddly, bo is an intensifier and diddly is a truncation of diddly squat, which means "absolutely nothing".
On November 20, 1955, Bo Diddley appeared on the popular television program The Ed Sullivan Show. When someone on the show's staff overheard him casually singing "Sixteen Tons" in the dressing room, he was asked to perform the song on the show. Seeing "Bo Diddley" on the cue card, he thought he was to perform both his self-titled hit single and "Sixteen Tons". Sullivan was furious and banned Bo from his show, reputedly saying that he wouldn't last six months. Chess Records included Bo Diddley's cover of "Sixteen Tons" on the 1960 album 'Bo Diddley Is a Gunslinger'.
Bo Diddley's hit singles continued in the 1950s and 1960s: "Pretty Thing" (1956), "Say Man" (1959), and "You Can't Judge a Book by the Cover" (1962). He also released numerous albums, including Bo Diddley Is a Gunslinger and Have Guitar, Will Travel. These bolstered his self-invented legend. Between 1958 and 1963, Checker Records released eleven full-length Bo Diddley albums. In the 1960s he broke through as a crossover artist with white audiences, but he rarely aimed his compositions at teenagers.
In 1963, Bo Diddley starred in a UK concert tour with the Everly Brothers and Little Richard. The up-and-coming Rolling Stones were billed as a supporting a

ct.
He wrote many songs for himself and also for others. In 1956 he and guitarist Jody Williams co-wrote the pop song "Love Is Strange", a hit for Mickey & Sylvia in 1957.
Bo Diddley included women in his band: Norma-Jean Wofford, also known as The Duchess; Gloria Jolivet; Peggy Jones, also known as Lady Bo, a lead guitarist (rare for a woman at that time); Cornelia Redmond, also known as Cookie V; Debby Hastings, who led his band for the final 25 years. After moving from Chicago to Washington, D.C., he set up one of the first home recording studios, where he not only recorded the album Bo Diddley Is a Gunslinger but produced and recorded his valet, Marvin Gaye. Bo Diddley co-wrote the Marquees' record "Wyatt Earp", the first single to feature Gaye. It was released on Okeh Records, after the Chess brothers turned it down. During this time, Moonglows' founder Harvey Fuqua sang backing vocals on many of Diddley's home recordings.
Over the decades, Bo Diddley's performing venues ranged from intimate clubs to stadiums. On March 25th 1972, he played with the Grateful Dead at the Academy of Music in New York City. Also in the early 1970s, the soundtrack of the ground-breaking animated film 'Fritz the Cat' contained his song "Bo Diddley", in which a crow idly finger-pops to the track.
In 1979, Bo appeared as an opening act for the Clash on their US tour and in Legends of Guitar (filmed live in Spain in 1991), with B.B. King, Les Paul, Albert Collins, and George Benson, among others. He joined the Rolling Stones on their 1994 concert broadcast of Voodoo Lounge, performing "Who Do You Love?".
In 2006, Bo participated as the headliner of a grassroots-organized fundraiser concert to benefit the town of Ocean Springs, Mississippi, which had been devastated by Hurricane Katrina. In January 2006, the Florida Keys had recovered enough to host the fundraising concert to benefit the more hard-hit community of Ocean Springs. When asked about the fundraiser, Bo Diddley stated, "This is the United States of America. We believe in helping one another".