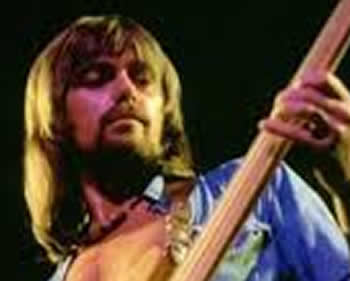 Boz Burrell died aged sixty of Heart Attack on 21st September 2006 during rehearsals in Marbella, Spain.
Boz Burrell was born Raymond Burrell on 1st August 1946 in Holbeach, Lincolnshire, U.K. As a teen in the 1950s, he began playing rhythm guitar for the Tea Time 4, a group formed with his school pal Bernie Rudd. They both acquired a passion for jazz and enjoyed acts such as Mose Allison, John Coltrane, and Charlie Mingus. By 1963 Boz Burrell became the vocalist for The Tea Time 4, an R&B/Jazz quartet with a reputation of upstaging the acts for whom they opened. Lineup changes were inevitable but success came with a move to London in 1965 at the suggestion of manager, Jack Barrie. With the addition of Ian McLagan on keyboard and a name change to Boz People, the group secured a contract with EMI's Columbia label.
Boz Burrell's style leaned more towards jazz, whereas McLagan was into Booker T, four singles being recorded and backing band slots with Kenny Lynch and Elkie Brooks. However, with little commercial success McLagan soon left to join The Small Faces.
Boz Burrell next enjoyed a short stint in the soul band, Feel For Soul, back in Norwich from 1966 until the following year. In late 1965, Boz Burrell was briefly considered to replace Roger Daltrey in The Who.
In 1968 Boz Burrell recorded a cover of Bob Dylan's Down in the Flood released as a single simply as 'Boz'. He was joined by organist Jon Lord, guitarist Ritchie Blackmore and drummer Ian Paice, who formed Deep Purple at the same time, and bassist Chas Hodges, later of Chas and Dave fame.
In 1971 Boz Burrell joined King Crimson as the new vocalist, having met Robert Fripp while both were performing with Centipede. After a last minute let down from new bassist Rick Kemp, Boz, who had only limited guitar-playing ability, was installed as the band's bass player with Fripp and Ian Wallace teaching him to play rather than start the search again.
The band toured and recorded the band's fourth studio album, Islands, a warmer sounding release and the band's only string ensemble experimentation. Tensions began socially on tour and creatively with the direction of the group's latest effort. This led to lyricist Peter Sinfield being ousted following the band's next tour. D

uring rehearsals in early 1972 the band fell apart with all members leaving due to creative restrictions imposed by Fripp as a "quality control" measure.
The band members were convinced to rejoin and fulfil their touring commitments for that year with the intention of disbanding thereafter. Recordings from this subsequent tour exist as the live compilation, Earthbound. Although relations improved between both parties leading to an offer from the musicians to continue on in the band, Fripp had already moved on and declined.
In 1973 Boz Burrell, Wallace and Mel Collins reunited with Sinfield for his solo effort, Still. They also went on to form Snape with Collective Consciousness Society's Alexis Korner and Peter Thorup, who had been on tour with King Crimson in the states the previous year, releasing the studio album, Accidentally Born in New Orleans, and a live album, Live on Tour in Germany. In 1974 Boz Burrell featured with 'Streetwalkers' along with other members of Family and King Crimson.
Boz Burrell was a founding member of the supergroup, Bad Company, formed in 1973 along with ex Free vocalist Paul Rodgers and drummer Simon Kirke and ex Mott the Hoople guitarist, Mick Ralphs. The band debuted with the self-titled Bad Company in 1974 which eventually went Platinum, as did the 1975 follow-up, Straight Shooter and 1976's Run With the Pack.
1977's Burnin' Sky proved less successful, but the group's fifth release in 1979, Desolation Angels, saw the band once again return to platinum status.
Using the name Bad Company, Ralphs and Kirke continued to play together, but it was not until 1998 that Boz Burrell rejoined his bandmates along with Rodgers for a reunion tour, recording four new songs and releasing the compilation 'The 'Original' Bad Co. Anthology'. Boz Burrell again left the band in 1999.
In January 1981, Boz Burrell joined Roger Chapman again for his solo band, The Shortlist, leaving in 1983. He returned in May 1987 but left again the following year in June. In 1982 Boz Burrell contributed to Jon Lord's Solo album, Before I Forget, on the track Hollywood Rock And Roll and in 1984 he joined the short lived Nightfly.
In the 1990s Boz Burrell worked with such acts as Alvin Lee for his Best of British Blues tour of 1996 and Ruby Turner, but his main creative outlet was with his partnership with the Scottish blues singer, Tam White. Their collaboration developed into a trio, The Shoe String Band and a big band, the Celtic Groove Connection.