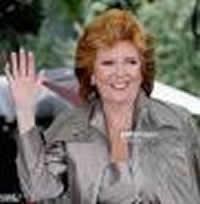 n. A spokes-person for the High Court of Justice in Andalusía suggested that an accident may have been a contributing factor to Cilla's death. Following the results of a post-mortem examination, her sons confirmed that Cilla had died from a stroke following a fall in her Spanish villa.
A ten-page pathologist's report confirmed that Cilla Black had suffered a sub-arachnoid haemorrhage after falling backwards and hitting her head, it was thought, on a terrace wall. It was believed she had not been found for at least four hours.
In 2014, she had stated that she wanted to die when she reached 75, as her mother, who suffered from progressive osteoporosis, had lived to 84 and her final years were difficult. According to a friend, she had recently said that she was approaching death, complaining of failing eyesight and hearing as well as arthritis. Cilla Black had been suffering with rheumatoid arthritis for years and was in "considerable agony" towards the end of her life.
In the days following her death, a book of condolence was opened at the Liverpool Town Hall. UK Prime Minister David Cameron stated, "Cilla Black was a huge talent who made a significant contribution to public life in Britain. My thoughts are with her family." Paul McCartney, Ringo Starr, Sheridan Smith, Holly Johnson, Cliff Richard and Paul O'Grady were among friends and colleagues in the entertainment industry who expressed their sorrow at Cilla Black's death. Comedian Jimmy Tarbuck, who had been a friend for decades, said, "She was the girl next door that everybody loved and would have loved as a daughter, a daughter-in-law." Songwriter Burt Bacharach said, "It will always be a most special memory for me of recording her on Alfie in Abbey Road Studios in 1965." Broadcaster Noel Edmonds said that she "captured the hearts of the British people" because "she was our Cilla - there were no airs and graces". Cilla Black's funeral service was held on 20 August 2015 at St Mary's Church, Woolton. Tom Williams, the Roman Catholic Auxiliary Bishop of Liverpool, led the service; Cliff Richard sang at the service and Paul O'Grady gave a eulogy. Spoken tributes, prayers and readings were made by Cilla Black's sons Ben and Robert, Jimmy Tarbuck and Christopher Biggins. The Beatles' song "The Long and Winding Road" was played as the coffin left the church. She was buried in a private ceremony at Allerton Cemetery in Allerton on the same day.
On 21st August 2015, the day after her funeral, 'The Very Best of Cilla Black', a compilation album of her hit songs, went to number one on the UK Albums Chart. It was Cilla Black's first number one album.

In October 2009 Cilla Black guest anchored Loose Women and on 28 November 2009 appeared on Sky 1 to present TV's Greatest Endings.
Between September 2010 and June 2011 she made guest panel list appearances and in 2011 also appeared, as herself, in the first episode of series 4 of ITV's Benidorm.
At the 2001 Royal Variety Performance, Cilla Black performed a scene from the musical Gypsy alongside Paul O'Grady (in his role as Lily Savage) and Barbara Windsor.

ITV honoured Cilla Black's 50 years in show business with a one-off entertainment special which aired on 16 October 2013. The show, called The One and Only Cilla Black, starred Cilla Black alongside Paul O'Grady, who hosted the show. The show celebrated Cilla Black's career and included a special trip back to Cilla Black's home city of Liverpool, a host of celebrity friends and some surprise music guests. Cilla Black paid homage to Blind Date with the return of its most popular contestants and saw her star in a special edition of Coronation Street.
In 2014, Cilla Black was the subject of a three-part television drama series, Cilla, focusing especially on her rise to fame in 1960s Liverpool and her relationship with Bobby Willis. ITV aired the first instalment on 15 September 2014, starring BAFTA award-winning actress Sheridan Smith.
Cilla Black was married to her manager, Bobby Willis, for 30 years from 1969 until he died from lung cancer on 23 October 1999. They had three sons: Robert (born 1970, who became her manager), Ben (born 1974) and Jack (born 1980).
Cilla Black was at one time a staunch supporter of the Conservative Party and publicly voiced her admiration of Margaret Thatcher, stating in 1993 that Thatcher had "put the 'great' back into Great Britain". In April 1992 she appeared on stage at a Conservative Party rally and made prominent calls for the party's re-election under the leadership of John Major. However, in a 2004 interview with The Guardian, Cilla Black claimed that she was "apolitical". The Liverpool Echo also quoted her as saying: "as for the politics thing, I'm not a Conservative."
In August 2014, Cilla Black was one of 200 public figures who were signatories to a letter to The Guardian expressing their hope that Scotland would vote to remain part of the United Kingdom in September's referendum on that issue.

Song: Anyone Who Had a Heart by Cilla Black