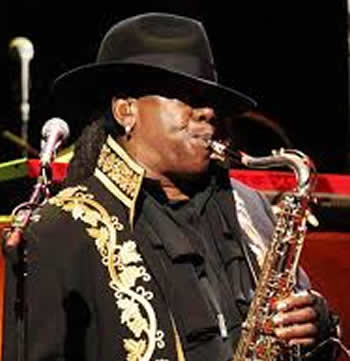 11 from complications caused by a stroke. Clarence had suffered a stroke on 12th June and underwent two surgeries after which he was declared in serious but stable condition. According to Rolling Stone magazine, he had been showing signs of recovery. Upon the announcement of Clarence Clemons' death, New Jersey Governor Chris Christie ordered all state flags to be lowered to half staff in his honor.
Clarence Clemons was born Clarence Anicholas Clemons, Jr. on January 11th 1942 in Norfolk County, Virginia, USA and was the son of Clarence Clemons, Sr., a fish market owner, and his wife Thelma. He was the oldest of their three children. His grandfather was a Southern Baptist preacher and, as a result, the young Clarence Clemons grew up in a very religious background listening to gospel music.
When he was nine, his father gave him an alto saxophone as a Christmas present and paid for music lessons. Clarence Clemons later switched to baritone saxophone and played in a high school jazz band. His uncle also influenced his early musical development when he bought him his first King Curtis album. and his work with The Coasters in particular, would become a major influence on Clemons and led to him switching to tenor saxophone.
As a youth Clarence Clemons also showed potential as a football player, and graduated from Crestwood High School before attending Maryland State College on both music and football scholarships. He played as a lineman on the same team as Art Shell and Emerson Boozer and attracted the attention of the Cleveland Browns, who offered him a trial. Clarence Clemons also tried out for the Dallas Cowboys. However, the day before, he was involved in a serious car accident which effectively ended any plans of a career in the National Football League. He was eventually posthumously inducted into the university's Athletics Hall of Fame in 2012.
At age eighteen Clarence Clemons had one of his earliest studio experiences, recording sessions with Tyrone Ashley's Funky Music Machine, a band from Plainfield, New Jersey, that included Ray Davis, Eddie Hazel and Billy Bass Nelson, all of whom later played with Parliament-Funkadelic. He also performed with Daniel Petraitis, a New Jersey and Nashville legend. These sessions were eventually released in 2007, by Truth and Soul Records as Let Me Be Your Man. While at Maryland State College Clarence Clemons also joined his first band, The Vibratones, which played James Brown covers and stayed together for about four years between 1961 and 1965. While still playing with this band he moved to Somerset, New Jersey, where he worked as a counsellor for emotionally disturbed children at the Jamesburg Training School for Boys between 1962 and 1970.

The story of how Clarence Clemons first met Bruce Springsteen has entered into E Street Band mythology. "The E Street Shuffle" with a monologue about how they met and the event was also immortalized in "Tenth Avenue Freeze-Out". They allegedly met for the first time in September 1971. At the time Clarence Clemons was playing with Norman Seldin & the Joyful Noyze at The Wonder Bar in Asbury Park, New Jersey. Seldin was a Jersey Shore musician/entrepreneur who, as well as playing piano and leading various bands, had his own record label, Selsom Records. In 1969, Clarence Clemons had recorded an eponymous album with this band. In 2008, tracks from this album were reissued on an anthology, Asbury Park — Then And Now, put together by Seldin. It was Karen Cassidy, lead vocalist with the Joyful Noyze, who encouraged Clarence Clemons to check out Springsteen, who was playing with the Bruce Springsteen Band at the nearby Student Prince. Clarence Clemons recalled their meeting in various interviews: He has said "one night we were playing in Asbury Park. I'd heard The Bruce Springsteen Band was nearby at a club called The Student Prince and on a break between sets I walked over there. On-stage, Bruce used to tell different versions of this story but I'm a Baptist, remember, so this is the truth. A rainy, windy night it was, and when I opened the door the whole thing flew off its hinges and blew away down the street. The band were on-stage, but staring at me framed in the doorway. And maybe that did make Bruce a little nervous because I just said, "I want to play with your band," and he said, "Sure, you do anything you want." The first song we did was an early version of "Spirit in the Night". Bruce and I looked at each other and didn't say anything, we just knew. We knew we were the missing links in each other's lives. He was what I'd been searching for. In one way he was just a scrawny little kid. But he was a visionary. He wanted to follow his dream. So from then on I was part of history".
Well before this meeting, however, Clarence Clemons and Springsteen had moved within the same circle of musical acquaintances. Norman Seldin had managed and promoted several local bands, including The Motifs who featured Vinnie Roslin, later to play with Springsteen in Steel Mill. On April 22, 1966, Seldin had also organized a battle of the bands competition at the Matawan-Keyport Roller Drome in Matawan, New Jersey. Bruce Springsteen was among the entrants playing with his then band,
In July 1972, Bruce Springsteen began recording his debut album 'Greetings' from Asbury Park, N.J. and during breaks from recording, he jammed with Clarence Clemons and The Joyful Noyze on at least two occasions at The Shipbottom Lounge in Point Pleasant, New Jersey. When Bruce Springsteen then decided to use a tenor saxophone on the songs "Blinded by the Light" and "Spirit in the Night," he called Clarence Clemons. By October Springsteen was ready to tour and promote Greetings… and he put together a band featuring Clarence Clemons, Tallent, Danny Federici and Vini Lopez. Clarence Clemons played his last gig with Norman Seldin & The Joyful Noyze at the Club Plaza in Bayville, New Jersey, on October 21st 1972. Four days later Clarence Clemons made his debut with the formative E Street Band at an unadvertised, impromptu performance at The Shipbottom Lounge. Throughout the 1970s and 1980s Clarence Clemons featured prominently on Springsteen albums. On Born to Run he provided memorable saxophone solos on the title track, "Thunder Road", "She's the One", "Night", and "Jungleland" while Darkness on the Edge of Town featured notable solos on "Badlands" and "The Promised Land". The River saw Clarence Clemons feature on songs such as "The Ties That Bind", "Sherry Darling", "I Wanna Marry You", "Drive All Night" and "Independence Day" while Born in the U.S.A. saw solos on "Bobby Jean" and "I'm Goin' Down".
At the end of shows, while recognizing members of the E Street Band, Springsteen referred to Clarence Clemons as "The Biggest Man You Ever Seen". He sometimes changed this depending on where the E Street Band performs — at their 2009 concert in Glasgow he introduced Clarence Clemons as "the biggest Scotsman you've ever seen".
Clarence Clemons' final recordings with Springsteen and the E Street Band were featured on Springsteen's 2012 album, Wrecking Ball, and previously unreleased material featuring Clarence Clemons also appeared on the 2014 release 'High Hopes'. In April 2014, the E Street Band were inducted into the Rock and Roll Hall of Fame. Clarence Clemons' widow accepted on his behalf.

Outside of his work with the E Street Band, Clarence Clemons recorded with many other artists and had a number of musical projects on his own. The best known of these are his 1985 vocal duet with Jackson Browne on the Top-20 hit single "You're a Friend of Mine", and his saxophone work on Aretha Franklin's 1985 Top-10 hit single "Freeway of Love". He was managed briefly in the 1980s by former Crawdaddy editor Peter Knobler, whose wedding Clarence Clemons played with his b

and, Clarence Clemons & the Red Bank Rockers. During the 1980s Clarence Clemons also owned a Red Bank, New Jersey, nightclub called Big Man's West. He toured in the first incarnation of Ringo Starr & The All-Starr Band in 1989, singing "You're a Friend of Mine" (dueting with Billy Preston) and an updated rap arrangement of "Quarter to Three." In the mid-1990s, he recorded a Japan-only CD release called Aja and the Big Man "Get It On" with Los Angeles singer/songwriter Aja Kim. At this time he also recorded an instrumental record with Alan Niven producing, 'Peacemaker'. In the 2000s, Clarence Clemons along with producer Narada Michael Walden, put together a group called The Temple of Soul, releasing a single called "Anna". He also recorded with philanthropic teen band Creation. Clarence Clemons collaborated with Lady Gaga on the songs "Hair" and "The Edge of Glory" from her album Born This Way, providing a saxophone track and solo. Clarence Clemons occasionally sat in with the Grateful Dead and as recently as April 2011, sat in on several tunes with the Grateful Dead "spinoff" band Furthur during a concert in Boca Raton Florida. Just days before he suffered a major stroke, he shot a music video with Lady Gaga for "The Edge of Glory".

music: Into The Blue Forest by Clarence Clemons