Eddie Amoo died on 23rd February 2018 in Australia of u 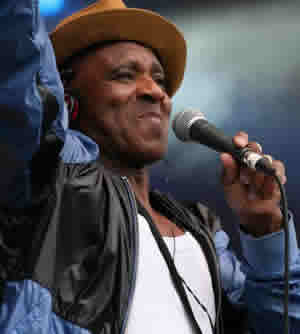 ndisclosed causes. Eddie is survived by his wife Sylvia and their four daughters; Dionne, Sara, Michaela and Marlene. Eddie was born Edward Robert Amoo, in Toxteth, Liverpool, U.K. on 4th May 1944.

In 1976, somewhat against the odds, the Real Thing topped the UK charts with You to Me Are Everything, a song that became a disco classic. Although black soul music was appreciated by British record-buyers, they had shown little interest in home-grown exponents. This was the breakthrough single, the one that said it was cool to buy British soul music.
The Real Thing continued to have hits, but by far their most thought-provoking release was their album, 4 from 8, from the following year, in which Eddie Amoo, and his younger brother, Chris wrote about the turmoil around them in the Toxteth area of Liverpool 8. A three-track medley of nearly twelve minutes included Children of the Ghetto, which was not a hit for the Real Thing but taken up very successfully by Earth Wind and Fire singer Philip Bailey, Courtney Pine and Mary J Blige.
Possibly the Real Thing’s original fans found the social realism hard to take and it was clearly inspired by Eddie’s hero, Curtis Mayfield.

The Liverpool 8 Medley is Eddie Amoo’s testimony to the streets he loved. It was a delight to walk around with him as everybody would recognise him and have a friendly word. In 1964 he married Sylvia Joel, and they lived close to Sefton Park, with their daughters.

Born in the city, Eddie was the son of another Liverpudlian, Moya, and her husband, Robert, a seaman from Ghana. Eddie recalled his mother taking him to see Frankie Lymon and the Teenagers at the Liverpool Empire in 1957.
Still, there were troubles ahead. Eddie was caught with a knife and sent to borstal. In the early 1960s, he befriended Joey and Edmund Ankrah, the sons of a minister, and together with Alan Harding and Nat Smeeda they formed a doo-wop group, the Chants. They sang Gene Chandler’s Duke of Earl and Kathy Young’s A Thousand Stars a cappella. They saw the Beatles, who occasionally backed them about six times. It would have been more but manager Brian Epstein didn’t think the Beatles should be backing anyone, Eddie is known to have recalled.
As a result, the Chants established their own backing unit, the Harlems. The Chants were signed to Pye Records and produced by Tony Hat

ch, and although they nearly scored with an infectious I Could Write a Book, they should have done better. They were championed by the Liverpool MP Bessie Braddock.
In 1975 Chris Amoo formed his own band, the Real Thing, which won ITV’s Opportunity Knocks, and he suggested that Eddie, now playing guitar and keyboards, should join them. Eddie coached the band, which included Dave Smith and Ray Lake, and they toured with David Essex, who used them on the hit album All the Fun of the Fair in 1975 and later on the hit single Me and My Girl (Night-Clubbing) in 1982.
The Real Thing’s first hits, You to Me Are Everything and Can’t Get By Without You, the latter of which reached Number 2, were written and produced by Ken Gold, but their subsequent successes, You’ll Never Know What You’re Missing, Love’s Such a Wonderful Thing and Can You Feel the Force?, inspired by Star Wars, were written by the Amoo brothers.

In the 80s the group had success with “decade remixes” but they wanted to avoid becoming a tired club act.
In 2013 the Real Thing recorded a live album and DVD at the Philharmonic Hall in Liverpool, and a documentary film about their career, directed by Simon Sheridan, is in its final stages.
Chris Amoo plans to continue with the The Real Thing, it has been noted.

song:'You To Me Are Everything' by The Real Thing