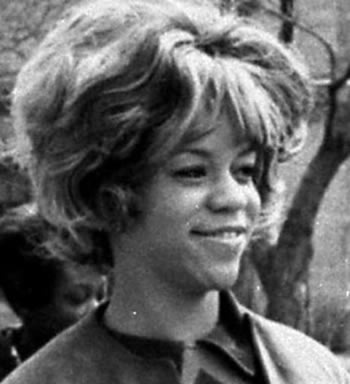 Florence Ballard began dating Thomas Chapman, a Motown Records associate, in 1967 and they married in a private celebration in Hawaii in February 1968. They had three daughters: Michelle Denise and Nichole Rene[ and Lisa Sabrina. Besides her three daughters, Florence's family included her cousin Hank Ballard and his grandnephew, NFL player Christian Ballard.

Florence Ballard was born in Detroit, Michigan on 30th June 1943 to Lurlee and Jesse Ballard, as the ninth of fifteen children. Her siblings were Bertie, Cornell, Jesse, Jr., Gilbert, Geraldine, Barbara, Maxine, Billy, Calvin, Pat, Linda and Roy. Her mother was a resident of Rosetta, Mississippi. Her father was born Jesse Lambert in Bessemer, Alabama and after his grandmother was shot and killed, he was adopted by the Ballard family. Jesse Ballard left his adoptive parents at age thirteen, and soon engaged in an affair with Florence Ballard's mother, who was only fourteen at the time. The Ballards moved to Detroit in 1929. Jesse soon worked at General Motors and being an amateur musician, soon helped instigate Florence's interest in singing; he taught her various songs and accompanied her on guitar. Financial difficulties forced the Ballard family to move to different Detroit neighborhoods and by the time Florence turned fifteen, they had settled at Detroit's Brewster-Douglass housing projects, and the next year Jesse Ballard died of cancer.
Named "Blondie" and "Flo" by family and friends, Florence Ballard attended Northeastern High School and was coached vocally by Abraham Silver. She met future singing partner Mary Wilson during a middle-school talent show and they became friends while attending Northeastern High School. From an early age, Florence Ballard aspired to be a singer and agreed to audition for a spot on a sister group of the local Detroit attraction, the Primes, who were managed by Milton Jenkins. After she was accepted, Florence recruited Mary Wilson to join Jenkins' group. Wilson, in turn, enlisted another neighbor, Diana Ross, then called "Diane". Betty McGlown completed the original lineup and Jenkins named them as "The Primettes". The group performed at talent showcases and at school parties before auditioning for Motown Records in 1960. Berry Gordy, head of Motown, advised the group to graduate from high school before auditioning again. Florence Ballard eventually dropped out of high school though her groupmates graduated.

In 1960, Florence Ballard was raped at knifepoint by local high-school basketball player Reggie Harding after leaving a sock hop at Detroit's Graystone Ballroom. The rape occurred in an empty parking lot. Florence responded by secluding herself in her house refusing to come outside, which worried her groupmates. Weeks later, Florence told Wilson and Ross what had happened. Though Ross and Wilson were sympathetic, they were also confused because Florence was considered to be strong-willed and unflappable. Both Wilson and Jesse Green, an early boyfriend of Florence's, had described her as a "generally happy if somewhat mischievous and sassy teenager." Wilson believes that the incident heavily contributed to the more self-destructive aspects of Florence's adult personality, like cynicism, pessimism, and fear or distrust of others, but the rape was never mentioned again.

The Supremes were recognized with a star on Hollywood Walk of Fame at 7060 Hollywood Blvd in 1994.

But back in 1960, the Primettes signed a contract with Lu Pine Records, issuing two songs that failed to perform well. During that year, they kept pursuing a Motown contract and agreed to do anything that was required, including adding handclaps and vocal backgrounds. By the end of the year, Berry Gordy agreed to have the Supremes record songs in the studio. In January 1961, Gordy agreed to sign them on the condition they change their name. Janie Bradford approached Florence with a list of names to choose from before she chose "Supremes". When the other members heard of the new name, they were not pleased. Diana Ross feared they would be mistaken for a male vocal group. Eventually Gordy agreed to sign them under that name in January 1961.

The Supremes struggled in their early years with the label, releasing eight singles that failed to crack the Billboard Hot 100, giving them the nickname "no-hit Supremes". One track, "Buttered Popcorn", led by Florence, was a regional hit in the Midwest, but still failed to chart. During a 1962 Motortown Revue tour, Florence briefly replaced the Marvelettes' Wanda Young while she was on maternity leave. Before the release of their 1962 debut album, Meet the Supremes, Barbara Martin, who had replaced Betty McGlown a year before they signed to Motown, left the group. Florence, Diana Ross and Mary Wilson remained a trio. After the hit success of 1963's "When the Love Light Starts Shining Through His Eyes", Diana Ross became the group's lead singer.

In the spring of 1964, the group released "Where Did Our Love Go", which became their first number-one hit on the Billboard Hot 100, paving the way for ten number-one hits recorded by Ross, Florence and Wilson between 1964 and 1967. After many rehearsals with Cholly Atkins and Maurice King, the Supremes' live shows improved dramatically as well. During this time, Florence sang lead on several songs on Supremes' albums, including a cover of Sam Cooke's " Good News". During live shows, Florence often performed the Barbra Streisand standard, "People". According to Mary Wilson, Florence's vocals were so loud she was made to stand 17 feet away from her microphone during recording sessions. Marvin Gaye, for whom Florence sang backing vocals on occasion, described her as "a hell of a singer, probably the strongest of the three girls." All in all, Florence contributed vocals to ten number-one pop hits and 16 top forty hit singles between 1963 and 1967.

Florence expressed dissatisfaction with the group's direction throughout its successful period. She would also claim that their schedule had forced the group members to drift apart. Florence blamed Motown Records for destroying the group dynamic by making Diana Ross the star. Struggling to cope with label demands and her own bou

t with depression, Florence turned to alcohol for comfort, leading to arguments with her group members. Florence's alcoholism led to her missing performances and recording sessions. Gordy sometimes replaced her on stage with the Andantes' Marlene Barrow. In April 1967, Cindy Birdsong, member of Patti LaBelle and the Blue Belles, became a stand-in for Florence. A month later, Florence returned to the group from what she thought was a temporary leave of absence. In June, Gordy changed the group's name to "The Supremes with Diana Ross", which was how they were billed on the marquee of Las Vegas' Flamingo Hotel.

On 1st July, the day after her 24th birthday, Florence Ballard showed up inebriated during the group's third performance at the Flamingo and stuck her stomach out from her suit. Angered, Gordy ordered her to return to Detroit, and Birdsong officially replaced her, abruptly ending her tenure with the Supremes. It had been decided as early as May that Birdsong would be Ballard's official replacement once Birdsong's contract with the Bluebelles was bought out. In August 1967, the Detroit Free Press reported that Florence Ballard had taken a temporary leave of absence from the Supremes due to "exhaustion". Florence eventually married her boyfriend, Thomas Chapman, in February 1968. A week earlier, Florence and Motown negotiated to have her released from the label. Her attorney in the matter received a one-time payment of $139,804.94 in royalties and earnings from Motown. As part of the settlement, Florence was advised to not promote her solo work as a former member of the Supremes. In March 1968, Florence signed with ABC Records and released two unsuccessful singles. After an album for the label was shelved, her settlement money was depleted from the Chapmans' management agency, Talent Management, Inc. The agency had been led by Leonard Baun, Florence's attorney who had helped to settle her matters with Motown. Following news that Baun was facing multiple embezzlement charges, Florence fired him. She continued to perform as a solo artist, opening for Bill Cosby that September at Chicago's Auditorium Theater. In January 1969, Florence performed at one of newly elected President Richard Nixon's inaugural balls.