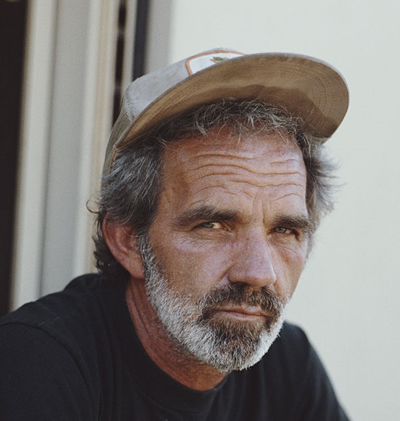 J.J. Cale was born John Cale on 5th December 1938 in Oklahoma City, Oklahoma. USA. He was raised in Tulsa, Oklahoma, and graduated from Tulsa Central High School in 1956. As well as learning to play the guitar he began studying the principles of sound engineering while still living with his parents in Tulsa, where he built himself a recording studio. After graduation he was drafted into military service, studying at the Air Force Air Training Command in Rantoul, Illinois. J.J. Cale's knowledge of mixing and sound recording turned out to play an important role in creating the distinctive sound of his studio albums.
Along with a number of other young Tulsa musicians, J.J. Cale moved to Los Angeles in the early 1960s, where he found employment as a studio engineer. While living in Los Angeles he cut a demo single in 1966 with Liberty Records of his composition "After Midnight". He distributed copies of this single to his Tulsa musician friends living in Los Angeles, many of whom were successfully finding work as session musicians. Although he managed to find a regular spot at the Whisky a Go according to his own testimony, Elmer Valentine suggested he call himself J. J. Cale to avoid confusion with John Cale of the Velvet Underground . He found little success as a recording artist and, not being able to make enough money as a studio engineer, he sold his guitar and returned to Tulsa, where he joined a band with Tulsa musician Don White.
In 1970, it came to his attention that Eric Clapton had recorded a cover of "After Midnight" on his debut album in 1970. As a result of this, it was suggested to J.J. Cale that he should take advantage of this publicity and cut a record of his own. His first album, 'Naturally', established his style, described by Los Angeles Times writer Richard Cromelin as a "unique hybrid of blues, folk and jazz, marked by relaxed grooves and J.J. Cale's fluid guitar and laconic vocals. His early use of drum machines and his unconventional mixes lend a distinctive and timeless quality to his work and set him apart from the pack of Americana roots music purists."
In the 2005 documentary To Tulsa and Back: On Tour with J.J. Cale, Cale's guitar style is characterized by Eric Clapton as "really, really minimal", and he states precisely, "it's all about finesse".
His biggest U.S. hit single, "Crazy Mama", peaked at number 22 on the U.S.A Billboard Hot 100 chart in 1972. In the 2005 documentary film To Tulsa and Back, J.J. Cale recounts the story of being offered the opportunity to appear on Dick Clark's American Bandstand to promote the song, which would have moved it higher on the charts. J.J. Cale declined when told he could not bring his band to the taping and would be required to lip-sync the words.
J.J. Cale moved to California in 1980 and became a recluse, living in a trailer without a telephone. His 1983 album #8 was poorly received and he asked to be released from his contract with PolyGram. When later asked how he had spent the 1980s he replied: "Mowing the lawn and listening to Van Halen and rap."
J.J. Cale often acted as his own producer/engineer/session player. His vocals, sometimes whispery, would be buried in the mix. He attributed his unique sound to being a recording mixer and engineer, saying, "Because of all the technology now you can make music yourself and a lot of people are doing that now. I started out doing that a long time ago and I found when I did that I came up with a unique sound."
Songs written by J.J. Cale that have been covered by other musicians include: "After Midnight" and "Cocaine" by Eric Clapton ("After Midnight" also was covered by Jerry Garcia and Wire and "Cocaine" was covered by Nazareth); "Bringing It Back" by Kansas; "Call Me The Breeze" by Lynyrd Skynyrd, Johnny Cash, Bobby Bare, and John Mayer; and "Clyde" by Waylon Jennings and Dr. Hook. Others: "I Got the Same Old Blues" by Captain Beefheart (on his 1974 album Bluejeans & Moonbeams), Bryan Ferry, Lynyrd Skynyrd, and Freddie King; "Magnolia" by Poco, Beck, and Lucinda Williams; "Ride Me High" and "Travelin' Light" by Widespread Panic; and "The Sensitive Kind" by Santana (on their 1981 album Zebop!) and John Mayall [A Sense of Place, 1990].