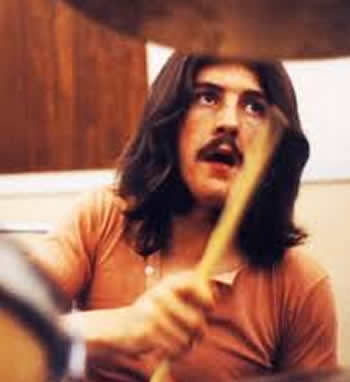 1980. He had been picked up the day before by Led Zeppelin assistant Rex King to attend rehearsals prior to a tour of North America. During the journey, John asked to stop for breakfast, where he drank four quadruple vodka Screwdrivers. He then continued to drink heavily after arriving at rehearsals. The band stopped rehearsing late in the evening and then went to Jimmy Page's house, the Old Mill House in Clewer, Windsor. After midnight John fell asleep; someone took him to bed and placed him on his side. Led Zeppelin's tour manager found him unresponsive the next afternoon and he was later pronounced dead.
The inquest on 27th October 1980 showed that in 24 hours, John Bonham had consumed around 40 shots of 40% ABV vodka, after which he vomited and choked. The finding was accidental death. An autopsy found no other drugs in John's body. John Bonham's remains were cremated and his ashes interred on 12th October 1980, at Rushock parish church, Worcestershire UK.

John Bonham was born John Henry Bonham on 31st May 1948 in Redditch, Worcestershire, UK, to Joan and Jack Bonham. He began learning to play at five, making a kit of containers and coffee tins, imitating his idols Max Roach, Gene Krupa and Buddy Rich. His mother gave him a snare drum when he was ten. He received his first drum kit from his father at age fifteen, a Premier Percussion set. John Bonham never took formal drum lessons, though as a teen he had advice from other Redditch drummers. Between 1962 and 1963, still at school, John Bonham joined the Blue Star Trio, and Gerry Levene & the Avengers.
John Bonham attended Lodge Farm Secondary Modern School, where his headmaster wrote in his report that "He will either end up a dustman or a millionaire. After leaving school in 1964, John worked for his father as an apprentice carpenter between drumming for local bands. In 1964, John Bonham joined his first semi-professional band, Terry Webb and the Spiders, and met his future wife Pat Phillips around the same time. He played in other Birmingham bands such as The Nicky James Movement and The Senators, who made a single, "She's a Mod", in 1964. John Bonham then took up drumming full-time. Two years later, he joined 'A Way of Life', but the band folded. Needing a regular income, he joined a blues group called Crawling King Snakes, whose lead singer was Robert Plant.
In 1967, A Way of Life asked John Bonham to return to the group, and he agreed, while keeping in touch with Plant. Plant formed Band of Joy and chose Bonham as the drummer. The band recorded demos but no album. In 1968, American singer Tim Rose toured Britain and asked Band of Joy to open his concerts. When Rose returned months later, John Bonham was invited by the singer to drum for Rose's band, which gave him a regular income.
After the retirement of The Yardbirds, guitarist Jimmy Page formed another band and recruited Plant, who in turn suggested John Bonham. On seeing Bonham drum for Tim Rose at a club in Hampstead, north London, in July 1968, Page and manager Peter Grant were convinced he was perfect for the project, first known as the New Yardbirds and later as Led Zeppelin.John Bonham was reluctant. Plant sent eight telegrams to John Bonham's pub, the "Three Men in a Boat", in Bloxwich, which were followed by 40 telegrams from Grant. John Bonham was also receiving offers from Joe Cocker and Chris Farlowe but he accepted Grant's offer. He recalled, "I decided I liked their music better than Cocker's or Farlowe's."
During Led Zeppelin's first tour of the United States in December 1968, John Bonham became friends with Vanilla Fudge's drummer, Carmine Appice. Appice introduced him to Ludwig drums, which he then used for the rest of his career. John Bonham used the longest and heaviest sticks, which he called "trees." His hard hitting was evident on many Led Zeppelin songs, including "Immigrant Song" (Led Zeppelin III), "When the Levee Breaks" (Led Zeppelin IV / Zoso.svg), "Kashmir" (Physical Graffiti), "The Ocean" (Houses of the Holy), and "Achilles Last Stand" . Page let John Bonham use a double bass drum in an early demo of "Communication Breakdown" but scratched the track because of John's "over-use" of it. The studio recording of "Misty Mountain Hop" captures his dynamics, similarly exhibited on "No Quarter". On cuts from later albums, John Bonham handled funk and Latin-influenced drumming. Songs like "Royal Orleans" and "Fool in the Rain" are examples, resp

ectively displaying a New Orleans shuffle and a samba.
John Bonham's drum solo, first entitled "Pat's Delight," later "Moby Dick", often lasted 30 minutes. He used bare hands for different sounds. John Bonham's sequence for the film The Song Remains the Same featured him in a drag race at Santa Pod Raceway to the sound of his solo, "Moby Dick". In Led Zeppelin tours after 1969, John Bonham included congas, orchestral timpani and a symphonic gong. He is credited by the Dallas Times Herald with the first concert use of electronic timpani drum synthesisers during "Kashmir" in Dallas, Texas, in 1977.
In 1969, John Bonham appeared on The Family Dogg's A Way of Life, with Page and Jones. John Bonham also played for Screaming Lord Sutch on Lord Sutch and Heavy Friends in 1970. He played on Lulu's 1971 single "Everybody Clap (Lulu song)," written by Maurice Gibb and Billy Lawrie. In 1972, John played on a Maurice Gibb-produced album by Jimmy Stevens called Don't Freak Me Out in the UK and Paid My Dues in the US, credited as "Gemini" (his star sign). John drummed for his Birmingham friend, Roy Wood, on his 1979 album, On the Road Again, and on Wings' album Back to the Egg on the tracks "Rockestra Theme" and "So Glad to See You Here". John was also featured on Paul McCartney & Wings "Beware My Love" demo version first recorded in 1976, it remained unreleased until 2014 with the release of the album Wings at the Speed of Sound boxset.