Sir Ken Dodd died at home in Knotty Ash. Liverpool, U.K. aged ninety years on 11th March 2018. He was in poor health and had suffered a chest infection. He is survived by his wife of two days, Anne. 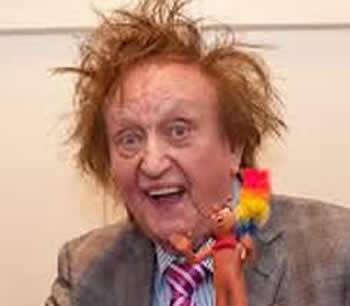 In 1955, Ken Dodd began a twenty-two year relationship with Anita Boutin; they were engaged at the time of her death from a brain tumour in 1977, at the age of 45. Shortly after her death, Ken Dodd began a relationship with Anne Jones, which lasted from 1978 until his death. They first met in 1961 when Anne appeared in The Ken Dodd Christmas Show at the Manchester Opera House.

Kenneth Arthur Dodd was born on 8th November 1927 in Knotty Ash, a suburb of Liverpool, Lancashire, in the former farmhouse where his parents lived. He had an elder brother, William and a younger sister, June. He went to the Knotty Ash School, and sang in the local church choir of St John's Church, Knotty Ash. He was to live in Knotty Ash all his life, dying in the house in which he was born, and often referred to the area – as well as its mythical "jam butty mines" and "black pudding plantations" – in his act.

He then attended Holt High School, a grammar school in Childwall, Liverpool, but left at the age of fourteen to work for his father, a coal merchant. Around this time he became interested in show business after seeing an advert in a comic: "Fool your teachers, amaze your friends—send 6d in stamps and become a ventriloquist!" and sending off for the book. Not long after, his father bought him a ventriloquist's dummy and Ken called it Charlie Brown. He started entertaining at the local orphanage, then at various other local community functions. His distinctive bucked teeth were the result of a cycling accident after a group of schoolfriends dared him to ride a bicycle with his eyes closed. Aged eighteen, Ken began working as a travelling salesman, and used his work van to travel to comedy clubs in the evenings

Ken Dodd gained his big break at age twenty-six when, in September 1954, he made his professional show-business debut as Professor Yaffle Chucklebutty, Operatic Tenor and Sausage Knotter at the Nottingham Empire. He later said, "Well at least they didn't boo me off". He continued to perform, and in 1955 he appear

ed at Blackpool, where, in the following year, he had a part in Let's Have Fun. His performance at the Central Pier was part of a comedy revue with Jimmy James and Company. Also on the same bill were Jimmy Clitheroe and Roy Castle. Sir Ken Dodd first gained top billing at Blackpool in 1958.

Sir Ken Dodd had many hit records, charting on eighteen occasions in the UK Top 40, including his first single "Love Is Like a Violin" in nineteen-sixty, produced on Decca Records by Alex Wharton, which charted at number 8 (UK). His version of Bill Anderson's song "Happiness" charted in 1964 and became his signature song.
Sir Ken Dodd's recording of "Tears" on the Columbia label topped the UK singles chart for five weeks in 1965, becoming the biggest hit single in Britain that year and selling over a million copies in the UK alone. The recording is the third best selling song of the 1960s in Britain; at the time it was the UK's biggest selling single by a solo artist and remains one of the biggest selling singles of all time. Sir Ken Dodd was selected to perform the song on A Jubilee of Music on BBC One on 31 December 1976, a celebration of the key pop successes of the Queen's first 25 years as Britain's monarch.

Sir Ken Dodd had two further UK top ten records: "The River (Le Colline Sono In Fioro)", written by Renato Angiolini with lyrics by Mort Shuman reaching number three in 1965 and "Promises", written by Norman Newell and Tom Springfield getting to number six in 1966). As well as his successful chart career as a ballad singer, Sir Ken Dodd occasionally released comedy novelty records, including the 1965 EP Doddy and the Diddy Men, featuring the song "Where's Me Shirt?" which Sir Ken co-wrote.

In the 1960s, his fame in the UK was such that he rivalled the Beatles as a household name, and his records have sold millions worldwide.