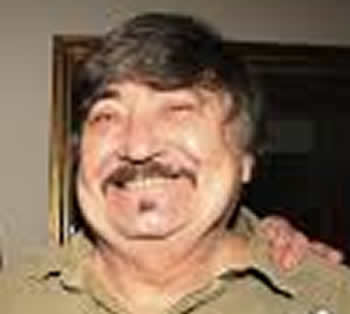 Kenny Ball died aged eighty-three on 7th March 2013 at Basildon Hospital, Essex, U.K. where he was being treated for pneumonia. Kenny was survived by his second wife, Michelle; his stepdaughters Nicole and Sophie; and his children from his first marriage; daughters Gillian and Jane and son Keith.

Kenny Ball was born in Ilford, Essex, U.K. on 22nd May 1930. At the age of fourteen he left school to work as a clerk in an advertising agency, but also started taking trumpet lessons. He began his career as a semi-professional sideman in bands, whilst also working as a salesman and for the advertising agency. He turned professional in 1953 and played the trumpet in bands led by Sid Phillips, Charlie Galbraith, Eric Delaney and Terry Lightfoot before forming his own trad jazz band, Kenny Ball and his Jazzmen, in 1958. His Dixieland band was at the forefront of the early 1960s UK jazz revival.

In 1961 their recording of Cole Porter's "Samantha" became a hit, and they reached number 2 at the end of 1961 on the UK Singles Chart, and in March 1962 on the Hot 100, with "Midnight in Moscow" . That record sold over one million copies, earning gold disc status. Their next single "March of the Siamese Children" in 1962, from The

King and I, topped the pop music magazine New Musical Express's chart on 9th March 1962. Further hits followed and such was their popularity in the UK that Kenny Ball was featured, along with Cliff Richard, Brenda Lee, Joe Brown, Craig Douglas and Frank Ifield, on the cover of the New Musical Express in July 1962, although in the United States they remained a "one-hit wonder".

In January 1963, New Musical Express reported that the biggest trad jazz event to be staged in Britain had taken place at Alexandra Palace. The event included George Melly, Diz Disley, Acker Bilk, Chris Barber, Alex Welsh, Ken Colyer, Monty Sunshine, Bob Wallis, Bruce Turner, Mick Mulligan and Kenny Ball. The same year, Kenny became the first British jazzman to become an honorary citizen of New Orleans, and appeared in the 1963 film Live It Up!, featuring Gene Vincent.
In 1968 his band appeared with Louis Armstrong during Louis' last European tour. Kenny Ball later appeared on BBC Television's highly rated review of the 1960s music scene Pop Go The Sixties, performing "Midnight in Moscow" with his Jazzmen on the show's broadcast on BBC 1 on New Years Eve 1969. His continued success was aided by guest appearances on every edition of the first six series of the BBC's Morecambe and Wise Show. He later said that the peak of his career was when Kenny Ball and his Jazzmen played at the reception for the wedding of Prince Charles and Lady Diana.

Kenny Ball and his band enjoyed one of the longest unbroken spells of success for trad jazz bands and his status rivals contemporaries Acker Bilk and Chris Barber. Their joint album, The Best of Ball, Barber and Bilk, reached number One on the UK Albums Chart. He has charted fourteen Top 50 hit singles in the UK alone. All such releases were issued on the Pye record label. In 2001 Kenny Ball was part of the recording of an album on the Decca label. It featured Don Lusher, Acker Bilk, John Chilton and the Feetwarmers, John Dankworth, Humphrey Lyttelton and George Melly, and was entitled British Jazz Legends Together.