Kevin Ayres died aged sixty-eight in his sleep on 18t 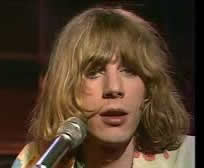 brooding "Brainstorm", Hugh Hopper from Soft Machine played bass on the title track and Bridget St John, a British folk singer beloved of John Peel, duetted with Kevin on "Baby Come Home", the first time they had sung together since 1970 on Shooting at the Moon. The Unfairground was released to critical acclaim in September 2007.