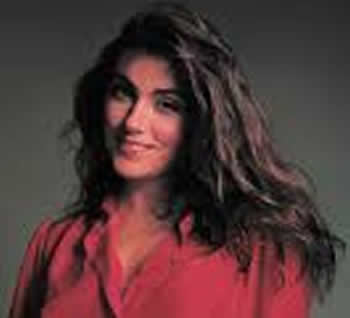 brain aneurysm at her lodge in East Quogue, New York, U.S.A. and her ashes were scattered over Long Island Sound, the tidal estuary running between New York's Long Island and Connecticut. It was reported by the media that she had been experiencing headaches for several weeks before dying, but did not seek medical attention.

s before dying.
Laura Branigan had official greatest hits collections released in South America, Japan, Germany, South Africa, and the U.S.; the U.S. collection was released in 1995. The 13-track The Best of Laura Branigan included two newly-recorded covers: "Show Me Heaven" (written by Maria McKee) and the Donna Summer hit "Dim All the Lights," which Laura Branigan released in several remixes.
On 15th August 1995, Laura Branigan was a guest on the TV show Talking Food, hosted by Robin Leach and broadcast by the Food Network, and she promoted the album and sang the Donna Summer hit before preparing her Summer Delight pasta dish on the show.
In February 1996, she was selected to be part of the international jury at the XXXVII Festival Internacional de la Canción de Viña del Mar, in Chile. Besides her duties as a jury member of this international musical competition, Laura performed on Friday the 16th on the main stage for an audience who enthusiastically sang her greatest hits.
In early 2001 Laura Branigan's return to the stage was postponed, when she broke both of her femurs in a three metre fall from a ladder while she was hanging wisteria outside her three-bedroom lakeside home in Westchester County, New York, resulting in physical therapy for six months. In 2002, she performed twice as the "singing" Janis Joplin in the off-Broadway musical 'Love, Janis', before dropping out of the show. Pennsylvania. In later years she continued to record and in 2002, her second official US hits collection, 'The Essentials', was released.

song:'Show Me Heaven' by Laura Branigan