Lee Brilleaux died of lymphoma, at the age of forty-one at his ho 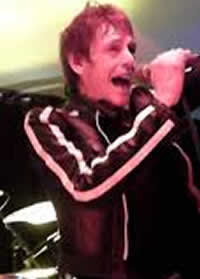 me in Leigh-on-Sea, Essex, UK.
Lee was born Lee John Collinson on 10th May 1952 in Durban, South Africa, from English parents. He was brought up in Ealing, Loncon, UK and moved to Canvey Island with his family when he was thirteen.
He co-founded Dr Feelgood with Wilko Johnson in nineteen seventy-one and was the band's lead singer, harmonica player and occasional guitarist. Lee Brilleaux and Wilco Johnson developed a frantic act, often charismatically dressed in dark suits and loose ties, shabby rather than smart. The rough, and almost ruthless, edge which ran through his vocal and harmonica style reflected the character and philosophy of the band.
In 1976, Lee Brilleaux helped found Stiff Records, one of the driving forces of the "New Wave" of the mid- to late-1970s, with a loan from singer-songwriter John Hiatt.
Wilco Johnson left Dr Feelgood in 1977 and Lee Brilleaux reformed the band with different musicians in the 80s and early 90s. By 1984 he was the only founder member remaining. In 1986, he recorded the album 'Brilleaux 86', featuring songs by Johnny Cash. His last performance was in January 1994, at the Dr Feelgood Music Bar in Canvey Island, Essex, U.K.