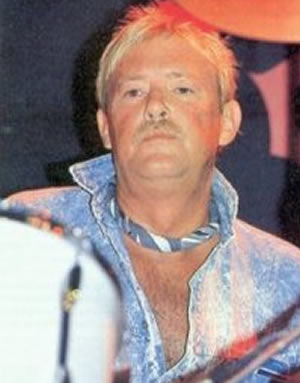 1993 from liver failure at his condominium in Florida, U.S.A. He does not appear to have been survived by any known blood relatives. By 1990 Michael Clarke's health had declined from a lifetime of hard drinking, resulting in a number of hospital stays.
Michael Clarke was born in Spokane, Washington, U.S.A.. His father was an artist and his mother was a musician. Michael Clarke ran away from home when he was seventeen years old and hitch-hiked to California to become a musician. He has been said to have been discovered by Byrds' founder David Crosby while playing bongos on a beach. Others say that he was discovered by singer-songwriter Ivan Ulz, in North Beach, San Francisco and was introduced to other Byrds members by him.
Michael Clarke was not an accomplished musician prior to joining the Byrds and his only previous musical knowledge was rudimentary piano lessons he received in his youth. He had never played drums and, after joining the Byrds, not having a drum set, practiced on a makeshift kit of cardboard boxes and a tambourine. According to lead guitarist Roger McGuinn's web site, Michael Clarke was hired by McGuinn and Gene Clark for his resemblance to Rolling Stones' guitarist Brian Jones. Michael Clarke's strength as a drummer is considered to be illustrated by his jazz-oriented playing on the Byrds' "Eight Miles High", on their Fifth Dimension album.
Unlike the other members of the Byrds, Michael Clarke was not a prolific songwriter. His compositional contributions with the band encompass co-writing credits for the songs "Captain Soul", an instrumental from the Fifth Dimension album, and "Artificial Energy" from The Notorious Byrd Brothers. He was also given an arrangement co-credit for two traditional songs that appeared on Fifth Dimension: "Wild Mountain Thyme" and "John Riley" (although the latter is credited to Bob Gibson and songwriter/arranger Ricky Neff on the album itself).
In August 1967, during the recording sessions for The Notorious Byrd Brothers album, Michael Clarke walked out on the Byrds and was temporarily replaced by session drummers Jim Gordon and Hal Blaine. Michael Clarke had recently become dissatisfied with his role in the band and didn't particularly like the new material that the songwriting members were providing. However, Michael Clarke continued to honor his live concert commitments, appearing at a handful of shows during late August and early September 1967. Michael Clarke returned from his self-imposed exile in time to contribute drums to the song "Artificial Energy" in early December 1967, but was subsequently dismissed from the Byrds once The Notorious Byrd Brothers album was completed.
After a short stint in Hawaii working in the hotel business and pursuing his interest in painting, Michael Clarke played briefly with Gene Clark in Dillard and Clark, before following Hillman and Gram Parsons to country-rock pioneers The Flying Burrito Brothers, after their first album had been recorded. Michael Clarke served with the Burritos between early 1969 and 1971, appearing with the band at the infamous Altamont Free Concert in California, headlined by The Rolling Stones, in December 1969. During the 1974-1981 period, Michael Clarke was a member of Firefall, followed by a period as the drummer for Jerry Jeff Walker, ending in 1982.
Between 1983 and 1985, Michael Clarke joined former Byrds' singer Gene Clark in The Firebyrds, a touring band which had been put together to promote Gene Clark's 1984 solo album Firebyrd. In 1985, following the breakup of The Firebyrds, Michael Clarke and Clark again joined forces for a series of controversial shows billed as a "20th Anniversary Tribute to The Byrds". Among the other musicians involved in this project were John York, another ex-Byrd from the late 1960s line-up of the group, ex-Burritos and Firefall singer Rick Roberts, ex-member of The Beach Boys' early 1970s line-up Blondie Chaplin, and Rick Danko, formerly of The Band. Many nightclubs simply shortened the billing to The Byrds, and the pair soon found themselves involved in acrimonious court battles with Roger McGuinn, David Crosby, and Chris Hillman over use of the group's name.
The Byrds set aside their differences long enough to appear together at their induction into the Rock & Roll Hall of Fame in January 1991, where the original lineup played three songs together: "Mr. Tambourine Man", "Turn! Turn! Turn!" and "I'll Feel a Whole Lot Better". Gene Clark died less than five months later, of

During his final days, Michael Clarke had expressed a wish to appear on television in the hope of alerting children to the dangers of alcoholism. Following his wishes, Michael Clarke's girlfriend Susan Paul started a foundation in Michael Clarke's name, called the Campaign for Alcohol-free Kids.
In 1994, a year after his death, Michael Clarke's paintings were published in Dick Gautier and Jim McMullan's book, Musicians As Artists.

song:'Eight Miles High' by The Byrds