Peter Bardens died aged fifty seven on 22nd January 2002 from lung cancer in Malibu, California, U.S.A. and is interred in the 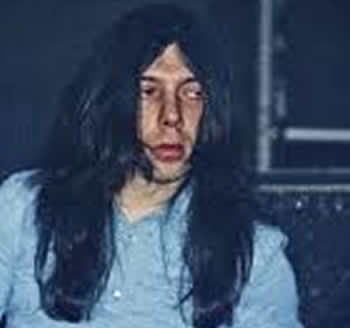 Hollywood Forever Cemetery.
Peter Bardens was born on 19th June 1944 in Westminster, London, U.K. and grew up in London's Notting Hill. He studied fine art at Byam Shaw School of Art, and learned the piano, before switching to the Hammond organ after listening to Jimmy Smith. In 1965, he spent a brief spell as the keyboard player with Van Morrison's band 'Them'.
After leaving Them, Peter formed a band called The Peter B's, which released a 45rpm in 1966 called "If You Wanna Be Happy". Peter moved on and formed Peter B's Looners which eventually morphed into Shotgun Express, a band that played soul music and featured Rod Stewart, Peter Green and Mick Fleetwood who is later known to have said that Peter Barden's recruitment into the band kick-started his own musical career.
From August 1968 to February 1970, Peter formed 'The Village' which featured future Elvis Costello and The Attractions bassist Bruce Thomas and Bill Porter on drums. They released a single "Man In The Moon"/"Long Time Coming"
In 1970, Peter Bardens recorded The Answer, an album featuring Peter Green and Andy Gee. Peter Bardens recorded an eponymous album in 1971 which was released in the United States as 'Write My Name in the Dust' before forming Camel in 1972. Peter left Camel in 1978 to join Van Morrison's band. He recorded Wavelength with Van Morrison and appeared in the line up of the album's promotional tour. By the end of the 1970s, Peter Bardens began exploring electronica and released the album Heart to Heart in 1979.
Peter Bardens co-wrote "Looking for a Good Time" with Bobby Tench, featured as the B-side of the single "Chain Gang" in 1982, which Tench had recorded as a tribute to Sam Cooke. During that era, Peter Bardens also played with the Alan Parsons Project. In 1984, he became a member of Keats, an Alan Parsons Project offshoot, and released an album with them. Peter Bardens continued to release a number of solo electronic albums including 'Seen One Earth' in 1987, which found chart success in the United States. The first single from the album, "In Dreams", was met with commercial success as well. The song enjoyed heavy airplay on rock stations in the U.S.A. and Australia, where Brisbane rock station 4MMM, the most popular radio station in the country at the time, added it to their playlist. In 1988, he followed this with Speed of Light which featured Mick Fleetwood. "Gold" from this album was released in the U.S.A. as a single and found some success on MTV.
Peter released Water Colours in 1991, an album that featured his former Camel bandmate Andy Ward and Caravan's Dave Sinclair. Peter Bardens formed the band Mirage and released a new album Big Sky in 1994. His last concert, subsequent to being diagnosed with a brain tumour, was in Los Ang 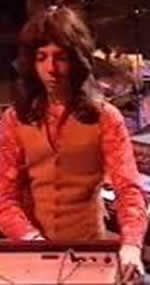 eles in the summer of 2001.
A double CD Write My Name in the Dust: The Anthology 1963-2002 was released after Peter Barden's death and included tracks recorded throughout his career