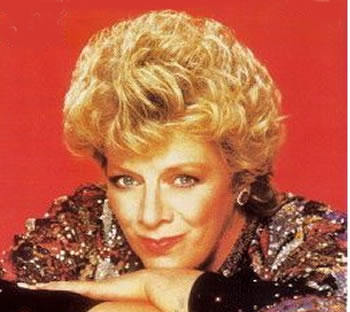 Her nephew, George Clooney, was a pallbearer at her funeral, which was attended by numerous stars and she is buried at Saint Patrick's Cemetery, Maysville, Kentucky, U.S.A.
Rosemary Clooney was married twice to Puerto Rican movie star José Ferrer, 16 years her senior. Rosemary first married Ferrer in 1953, in Durant, Oklahoma. They moved to Santa Monica, California, in 1954, and then to Los Angeles in 1958. Together, the couple had five children: Miguel, Maria, Gabriel, Monsita, and Rafael.
Rosemary remarried José Ferrer in November 1964, in Los Angeles. However, the marriage again crumbled while José was carrying on an affair. The couple divorced again after she found out about the affair, this time in 1967.
In 1968, her relationship with a drummer ended after two years. At this time, following a tour, she became increasingly dependent on pills.
Rosemary Clooney's first recordings, in May 1946, were for Columbia Records. She sang with Tony Pastor's big band. Rosemary continued working with the Pastor band until 1949, making her last recording with the band in May of that year and her first as a solo artist a month later, still for Columbia. In 1950–51, she was a regular on the radio and television versions of "Songs For Sale" on CBS. In 1951, her record of "Come On-a My House", produced by Mitch Miller, became a hit. It was her first of many singles to hit the charts—despite the fact that Rosemary hated the song passionately. She had been told by Columbia Records to record the song, and that she would be in violation of her contract if she did not do so. Rosemary recorded several duets with Marlene Dietrich and appeared in the early 1950s on Faye Emerson's Wonderful Town series on CBS. Rosemary also did several guest appearances on the Arthur Godfrey radio show, when it was sponsored by Lipton Tea. They did duets as he played his ukulele, and other times she would sing one of her latest hits.
In 1954, Rosemary starred, along with Bing Crosby, Danny Kaye, and Vera-Ellen, in the movie White Christmas. Rosemary starred, in 1956, in a half-hour syndicated television musical-variety show 'The Rosemary Clooney Show'. The show featured The Hi-Lo's singing group and Nelson Riddle's orchestra. The following year, the show moved to NBC prime time as 'The Lux Show Starring Rosemary Clooney', but only lasted one season. The new show featured the singing group The Modernaires and Frank DeVol's orchestra. In later years, Rosemary Clooney often appeared with Bing Crosby on television, such as in the 1957 special 'The Edsel Show', and the two friends made a concert tour of Ireland together. In November 1957, she appeared on NBC's The Ford Show, Starring Tennessee Ernie Ford, a frequent entry in the "Top 20" and featuring a musical group called "The Top Twenty". In 1960, Rosemary Clooney and Crosby co-starred in a 20-minute CBS radio program aired before the midday news each weekday.
Rosemary Clooney left Columbia Records in 1958, doing a number of recordings for MGM Records and then some for Coral Records. Finally, toward the end of 1958, she signed with RCA Victor Records, where she stayed until 1963. In 1964, she went to Reprise Records, and in 1965 to Dot Records.
Upon her recovery from a nervous breakdown in 1968, Rosemary signed with United Artists Records in 1976 for two albums. Beginning in 1977, she recorded an album a year for the Concord Jazz record label, which continued until her death. This was in contrast to most of her generation of singers, who had long since stopped recording regularly by then. In the late 1970s and early 1980s, Rosemary did television commercials for Coronet brand paper towels, during which she sang a memorable jingle that goes, "Extra value is what you get, when you buy Coro-net." In the early 1980s, Jim Belushi parodied Rosemary Clooney and the commercial on NBC's Saturday Night Live. Rosemary sang a duet with Wild Man Fischer on "It's a Hard Business" in 1986, and in 1994 she sang a duet of Green Eyes with Barry Manilow in his 1994 album, Singin' with the Big Bands.
In 1995, Rosemary guest-starred in the NBC television medical drama ER which starred her nephew George Clooney. For her performance, she received a Primetime Emmy Award nomination for Outstanding Guest Actress in a Drama Series. In January 1996, Rosemary appeared on Garrison Keillor's Prairie Home Com

panion radio program. She sang "When October Goes"—lyrics by Johnny Mercer and music by Barry Manilow —from Manilow's 1984 album 2:00 AM Paradise Cafe.
Rosemary Clooney was also awarded Society of Singers Lifetime Achievement Award in 1998. In 1999, she founded the Rosemary Clooney Music Festival, held annually in Maysville, Kentucky, her hometown. She performed at the festival every year until her death. Proceeds benefit the restoration of the Russell Theater in Maysville, where Rosemary's first film, The Stars Are Singing, premiered in 1953.
She received the Grammy Lifetime Achievement Award in 2002.
Rosemary Clooney was born in Maysville, Kentucky,U.S.A. the daughter of Marie Frances and Andrew Joseph Clooney. She was one of five children. Her father was of Irish and German descent and her mother was of Irish ancestry. She was raised Catholic. When Rosemary was fifteen, her mother and brother Nick moved to California whilst she and her sister Betty, remained with their father. The family resided in the John Brett Richeson House in the late 1940s.
Rosemary and Betty became entertainers, whereas Nick became a newsman and television broadcaster . In 1945, the Clooney sisters won a spot on Cincinnati, Ohio's radio station WLW as singers. Her sister Betty sang in a duo with Rosemary for much of the latter's early career.

song:'Half As Much' by Rosemary Clooney