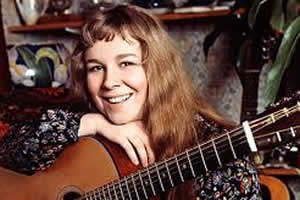 orrhage. A few weeks before, while on holiday with her parents and child in Cornwall, United Kingdom, Sandy was badly hurt when she fell down some stairs and hit her head apon concrete. Following this injury, she suffered from very strong headaches and a doctor prescribed her the painkiller Dextropropoxyphene. This is a drug which is known to have fatal side effects when taken along with alcohol. Sandy died at Atkinson Morley Hospital in Wimbledon, SouthWest London, UK.
The funeral took place on 27th April 1978 at Putney Vale Cemetery, London. Sandy Denny had gone to live in the village of Byfield in Northamptonshire, UK in the mid-nineteen-seventies. Here, Sandy gave birth to her only child, a daughter named Georgia in July nineteen seventy-seven.

Sandy Denny was born Alexandra Elene Maclean Denny at the Nelson Hospityal in the Merton Park area of London UK on 6th January 1947, 'Sandy' being initially her nick-name aquired from having such sandy coloured hair. Sandy studied classical piano as a child. Her Scottish grandmother was a singer of traditional songs. At an early age Sandy displayed an interest in singing. Sandy Denny was schooled at Coombe Girls' School in New Malden, South West London, UK. After leaving school, Sandy began training as a nurse at the Royal Brompton Hospital in Sydney Street, Chelsea, London SW3 but Sandy's nursing career was a short-lived one. During this time she took a place on a foundation course at Kingston College of Art, which began in September 1965.. There she became involved with a folk music club on the campus. Other students at the college included guitarist and future member of Pentangle, John Renbourn.
After her first public appearance at a pub in Kingston upon Thames called The Barge, Sandy Denny started working the folk club circuit in the evenings with a North American influenced song-set, including those by Tom Paxton and also traditional folk songs.
Sandy's earliest professional recordings were made later in mid-nineteen sixty-seven for the Saga record label, featuring traditional songs and covers of contemporary folk singers. These songs were collected on the 1970 album 'It's Sandy Denny'. The complete Saga studio recordings were issued on the 2005 compilation 'Where The Time Goes'.'
Sandy Denny abandoned her studies at art college and devoted herself full-time to music. While she was performing at the Troubadour folk club, a member of the Strawbs folk-rock band heard her. In nineteen sixty-seven she was invited to join the Strawbs. She recorded one album with them in Denmark which was released

belatedly in 1973 credited to Sandy Denny and the Strawbs called 'All Our Own Work'. This album includes an early solo version of her best-known and widely recorded composition, "Who Knows Where the Time Goes". 'A demo of that song was heard by American singer Judy Collins, who then covered it as the title track of an album of her own.

Sandy Denny began looking for a band that would allow her to stretch herself as a vocalist, reach a wider audience, and have the opportunity to display her songwriting but was unconvinced that the Strawbs could give her that opportunity, and so she quit that band.
Fairport Convention were auditioning in May 1968 for a replacement singer following the departure of singer Judy Dyble following their debut album. Sandy Denny was the obvious choice. '
Beginning with the album 'What We Did on Our Holidays', Sandy Denny is is said to have encouraged Fairport Convention to explore the traditional British folk repertoire, and so is regarded as a major pivot in the evolution of British folk-rock. She carried with her the traditional repertoire she had refined in the clubs.
Sandy Denny departed from Fairport Convention at the end of nineteen sixty-nine to develop her own songwriting more fully. She then formed Fotheringay
whom created one self-titled album. Fotheringay started to record a second album in late 1970, but it remained unfinished after Sandy Denny announced that she was leaving that group then.
Sandy then turned to recording her first solo album called 'The North Star Grassman and the Ravens' which was released in nineteen seventy-one.
Melody Maker readers twice voted Sandy as the "Best British Female Singer"
In nineteen seventy-three Sandy wedded her long term boyfriend and producer Trevor Lucas. Moreover she recorded a third solo album called 'Like an Old Fashioned Waltz'.
In nineteen seventy-four Sandy rejoined Fairport Convention of which her husband was by then a member for a world tour and a studio album called 'Rising for the Moon'.
Sandy and Trevor Lucas left Fairport Convention at the end of 1975 and worked on what was to become her final album called 'Rendezvous'.
A UK tour to promote Rendezvous in the autumn of nineteen seventy-seven included her final public appearance.

song: 'Who Knows Where the Time Goes' by Sandy Denny