Val Doonican died aged eighty-eight at a nursing home in Buckinghamshire, UK on 1st July 2015. Sarah, his daughter has commented that until the age of eighty-seven he was very fit and that it was just the result of old 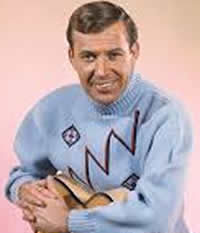 Val Doonican and Lynette Rae married in 1962. They had two daughters, Sarah and Fiona, and two grandchildren, Bethany and Scott. In later years they lived at Knotty Green in Beaconsfield, Buckinghamshire. Val Doonican officially retired in 1990 but was still performing in 2009. He had a second home in Spain and was a keen golfer and a talented watercolour painter. A further hobby he had was cooking. In June 2011, he was recognised by the Mayor of Waterford bestowing on him "The Freedom of the City".
Val Doonican was born on 3rd February 1927 in Waterford, Ireland, the youngest of the eight children of Agnes and John Doonican. He was from a musical family and played in his school band from the age of six. In 1941 when he was a teenager his father died, so he had to leave De La Salle College Waterford, to get factory jobs fabricating steel and making orange and grapefruit boxes. He began to perform in his hometown, often with his friend Bruce Clarke, and they had their first professional engagement as a duo in 1947. Val Doonican appeared in a summer season at Courtown Harbour, County Wexford. He soon featured on Irish radio, sometimes with Clarke, and appeared in Waterford's first-ever television broadcast. Then he played the drums in a band on a tour through Ireland.
In 1951 Val Doonican moved to Britain to join the Four Ramblers, who toured and performed on BBC Radio shows broadcast from factories, and on the Riders of the Range serials. He also began performing at United States Air Force bases. Val Doonican met dancer Lynnette Rae when both she and the Ramblers supported Anthony Newley on tour; they married in 1962. Recognising his talent and potential as a solo act, Newley persuaded him to leave the singing group and go solo. He was auditioned for radio as a solo act, and appeared on the radio show Variety Bandbox. Soon after his solo career started, he had his own radio show as well as performing in concerts and cabaret.
After seeing him in cabaret in London in 1963, impresario Val Parnell booked him to appear on Sunday Night at the Palladium. As a result of his performance, Bill Cotton, then Assistant Head of Light Entertainment at BBC Television, offered Val Doonican his own regular show. The TV shows were produced by Yvonne Littlewood and lasted for over 20 years. At their peak the shows attracted audiences of some 19 million viewers. The shows featured his relaxed crooner style, sitting in a rocking chair wearing cardigans or jumpers, sometimes performing comedic Irish songs including "Paddy McGinty's Goat", "Delaney's Donkey" and "O'Rafferty's Motor Car" as well as easy listening and country material on which he accompanied himself on acoustic guitar. Val Doonican's songs about O'Rafferty were popular enough for the BBC to publish a book, Val Val Doonican Tells The Adventures of O'Rafferty, which retold five of the tales, in 1969. As his were variety shows, his TV programmes gave a number of other performers, such as Dave Allen, early exposure. Regular guests included Bernard Cribbins, Bob Todd, the Norman Maen

Dancers, the Mike Sammes Singers, and the Kenny Woodman Orchestra. At its height The Val Val Doonican Show, which featured both American and British acts, had twenty million viewers.
The Palladium performance also kick-started Val's recording career. Between 1964 and 1973 Val Doonican was rarely out of the UK Singles Chart, his greatest successes including the singles "Walk Tall", "The Special Years", "Elusive Butterfly", "What Would I Be", "If The Whole World Stopped Loving", and "Morning" (Philips); and the albums 13 Lucky Shades of Val Val Doonican, and Val Val Doonican Rocks, But Gently which reached Number 1 in the UK Albums Chart in 1968 and knocked the Beatles' Sgt Pepper off the top of the chart. The 1966 single release "Elusive Butterfly" reached a UK chart peak of number 5 and number 3 in Ireland. In all, he recorded over fifty albums. After a spell with Philips records in the seventies he also recorded for RCA. He also sang the theme song to the film Ring of Bright Water.
Behind the scenes, Val Doonican was described as "a perfectionist who knew his limitations but always aimed to be 'the best Val Doonican possible.'" He was sometimes compared to American singer Perry Como, though he claimed his main influence was Bing Crosby. He appeared in three Royal Variety Performances. On 31st December 1976, Val Doonican performed his hit song "What Would I Be" on BBC One's A Jubilee of Music, celebrating British pop music for Queen Elizabeth II's impending Silver Jubilee.
Val Doonican won the BBC Television Personality of the Year award in 1966. He was the subject of This Is Your Life in 1970. Eamonn Andrews met him at the 18th green of the South Herts Golf Club as Val Doonican played a round of golf. Val also wrote two volumes of autobiography, The Special Years in 1980 and Walking Tall in 1985.