Craig Gruber died aged sixty-three on 5th May 2015 from prostate cancer in Jacksonville, Florida, U.S.A... He had been a rock bassist, best known as the original bassist

in Rainbow and most recently was a member for the band Zvekan. He also played in Elf, consisting of vocalist Ronnie James Dio, keyboardist Mickey Lee Soule, drummer Gary Driscoll and guitarist David Feinstein. Craig had been born on 15th July, 1951 in Cortland, New York, United States of America.
Elf released three albums before they joined Ritchie Blackmore in his newly formed band Rainbow in mid-1975. Craig Gruber played on Rainbow's first album, 'Ritchie Blackmore's Rainbow'. Soon after that album was released, Richie Blackmore fired everyone except Dio. Craig Gruber was also in the early recording sessions on Black Sabbath's 'Heaven and Hell album', co-writing "Die Young,".
Craig Gruber played live with Gary Moore on his supporting tour for his album 'Victims of the Future', and featured on Gary Moore's 1984 live album 'We Want Moore!' In 1980 he formed Bible Black with former Elf and Rainbow drummer Gary Driscoll. The band produced two albums before Driscoll's murder in 1987. Near the end of his life, Craig Gruber had been building a line of high-end "soloing" basses, which can be seen at Infinite Metal Werkz. Craig Gruber had also been working on an Elf reunion, even though such a prospect seemed unlikely given the deaths of Driscoll and frontman Ronnie James Dio.
Early in 2010 Craig Gruber formed "ED3N"- a metal band in the classic rock genre. The band featured vocalist Jeff Fenholt and guitarist David Shankle, of DSG and formerly Manowar. In April 2013 it was announced that Craig Gruber had joined the band Raven Lord. He was to replace Jamie Mallender for the bassist's position. However, Craig Gruber departed the band shortly thereafter and was replaced by Lucio Manca. That November, 2013, Craig Gruber announced via Facebook that he became part of a newly formed band founded by Csaba Zvekan called Zvekan. 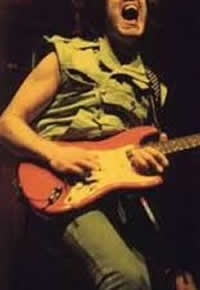