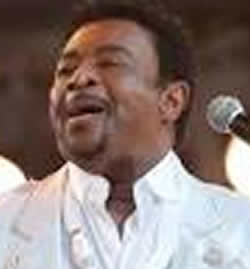 Dennis Edwards died aged seventy-four on 1st February 2018 in a Chicago, U.S.A. hospital, from meningitis, two days before his seventy-fifth birthday .
Dennis was admired by singer Aretha Franklin, who stated he was the inspiration behind her 1972 Rythm&Blues/Soul song "Day Dreaming". Dennis Edwards was briefly married to Ruth Pointer, whom he wed in Las Vegas in 1977. The couple had one daughter, Issa Pointer, who became a member of her mother's vocal group, The Pointer Sisters. Dennis Edwards moved to Florissant, Missouri in the 1980s to be closer to his mother.
Dennis Edwards was born in Fairfield, Alabama,U.S.A. about eight miles from Birmingham. He began singing as a toddler, just two years old, in his father's church. The Edwards family moved to Detroit, Michigan when Dennis Edwards was about ten years old, and Dennis would continue to sing in the church pastored by his father, eventually becoming choir director.
As a teenager, Dennis Edwards joined a gospel vocal group called The Mighty Clouds of Joy, and studied music at the Detroit Conservatory of Music. He was not allowed to sing or listen to secular music at home, and his mother disapproved when he began pursuing a career singing rhythm and blues music. In 1961 he organized his own soul/jazz group, Dennis Edwards and the Fireballs. In 1961, Dennis Edwards recorded a single for the obscure Detroit label, International Soulville Records, "I Didn't Have to (But I Did)" b/w "Johnnie on the Spot". Following time served in the US military, in 1966 Dennis Edwards auditioned for Detroit's Motown Records, where he was signed but placed on retainer. Later that year, he was assigned to join The Contours after their lead singer, Billy Gordon, fell ill. In 1967, the Contours were the opening act for several Temptations concerts, and Temptations members Eddie Kendricks and Otis Williams - who were considering replacing their own lead singer, took notice of Dennis Edwards and made his acquainta

nce.
Later in 1967, Dennis Edwards quit the Contours and was placed back on retainer. He attempted to get a release from his contract, as Holland–Dozier–Holland had promised to sign him to their new Invictus Records, but was drafted in late June 1968 to join the Temptations, who had just fired Ruffin from the act. Ruffin had tipped Dennis Edwards off that he was being drafted as his replacement, which eased Dennis Edwards' conscience in replacing him.
The Temptations officially introduced Dennis Edwards in July 1968 on stage in Valley Forge, Pennsylvania. However, Ruffin, who was attempting to make his way back into the group, crashed the stage during Edwards' lead vocal on "Ain't Too Proud to Beg" to significant applause. He continued similar stunts for about a month until, according to Dennis Edwards, the group decided to lay-off Dennis Edwards — with the promise of a solo deal from Motown — and rehire Ruffin. When Ruffin failed to show for his return engagement in Gaithersburg, Maryland the next night, Dennis Edwards was permanently kept on and the Temptations refused to entertain rehiring Ruffin any further. Dennis Edwards was the first singer to join the Temptations after their "Classic 5" period. With his rougher gospel-hewn vocals, Dennis Edwards led the group through its psychedelic, funk, and disco periods, singing on hits such as "Cloud Nine" ), "I Can't Get Next to You", "Ball of Confusion ", "Papa Was a Rollin' Stone", and "Shakey Ground" , among others. Two of these songs, "Cloud Nine" and "Papa Was a Rollin' Stone", won Grammy Awards. During this time, Dennis Edwards was engaged to Yvonne "Frankie" Gearing, the lead singer of Quiet Elegance, who toured with The Temptations as their backing group.
Dennis Edwards remained in the Temptations until being fired by Otis Williams in 1977 just before the group's departure from Motown to Atlantic Records. After a failed attempt at a Motown solo career, Dennis Edwards rejoined the Temptations in 1980, when they returned to Motown. In 1982, Dennis Edwards got the chance to sing with Ruffin and Eddie Kendricks as part of the Reunion album and tour. In 1989, Dennis Edwards was inducted into the Rock and Roll Hall of Fame as a member of The Temptations.
Motown re-launched Dennis Edwards' solo career, in 1984 with the hit single "Don't Look Any Further," a duet with Siedah Garrett. The album of the same name reached No. 2 on the Rythm&Blues charts and included the radio singles "(You're My) Aphrodisiac" and "Just Like You." The 1985 follow-up album Coolin' Out included the title track, an Rythm&Blues Top 30 hit; and "Try a Little Tenderness."