John Glascock died aged twenty-eight from a heart valve infection on 17th November 1979 in London, United Kingdom and was born on 2nd May, 1951 in 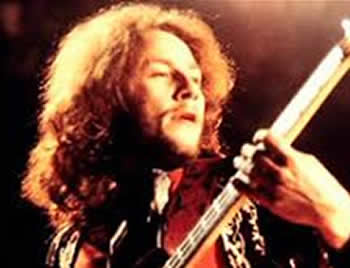 Islington, London, U.K. Jethro Tull bandsmate Barriemore Barlow paid for John Glascock's funeral, as John had died with almost no money.
The first band John Glascock played with was called The Juniors and he then played with The Gods from early 1965 until June 1967. After briefly playing with Head Machine in 1970 he joined Toe Fat from June 1969 untill December 1970. With Chicken Shack from January 1971 untill March 1972 John recorded the album 'Imagination Lady'.
In 1973 John joined Carmen. With them, he played bass guitar, sang backup vocals, occasionally played synthesizers, and even sang lead vocals on a few songs. John Glascock's basslines in Carmen were often technical and unusual. They were key to Carmen's unique sound. Unlike his work in Jethro Tull, John Glascock utilized effects in his sound while with Carmen, like a fuzz pedal in the song "Viva Mi Sevilla". John Glascock had one writing credit on the first album recorded by Carmen, Fandangos in Space in 1974, a short track called "Retirando" but shared this writing credit with the rest of the band.
John's writing expanded greatly by the time of the second album, 'Dancing on a Cold Wind' in 1975. On this album he had a writing credit for three songs, "Viva Mi Sevilla", "Purple Flowers" , and "Remembrances". His writing had reached a climax by the time of Carmen's third and final album, 'The Gypsies' in 1976. On this album he wrote "High Time" by himself, and sang lead vocals on it. He and the rest of the band also share a writing credit on the instrumental track "Margarita".
John Glascock then joined Jethro Tull in 1976, after having met Ian Anderson when Carmen opened several dates for Jethro Tull on their War Child tour. He then played on the Jethro Tull albums Too Old to Rock 'n' Roll: Too Young to Die! in 1976, Songs from the Wood in 1977, Heavy Horses in 1978, Bursting Out in 1978, and on three tracks on Stormwatch in 1979. In Jethro Tull he received no writing credits but sang backing vocals, and became the first harmony vocalist Jethro Tull ever had.
John Glascock played electric guitar on-stage when Ian Anderson's arrangement required it, as for instance in performances of "Skating Away (On the Thin Ice of the New Day)" from the Bursting Out live album, when the rest of the band was playing xylophone, glockenspiel and percussion.
John Glascock's health problems became apparent when he was unable to complete the U.S. leg of the Heavy Horses tour, missing a transatlantic simulcast from Madison Square Garden. He played his last gig on 1st May 1979, in San Antonio, Texas, three years to the day after his first gig with Jethro Tull.
Despite the diagnosis of heart valve damage caused by an infection, he continued his previous lifestyle, which involved heavy drinking, marijuana usage, and wild parties. His health continued to deteriorate. Ian Anderson gave him several warnings before finally laying him off with pay during the production of Stormwatch in 1979, completing most of the bass guitar parts himself. During the subsequent promotional tour with replacement bass player Dave Pegg, Ian Anderson learned of John Glascock's death and had to break the news to the rest o