Marie Fredriksson died from a brain tumor aged sixty-one on 9th December 2019 in Djursholm, Sweden. She was survived by her husband, Mikael Bolyos, her daughter, Inez Josefin and son, Oscar.
Marie was born: Gun-Marie Fredriksson on 30th May 1958 outside the small Swedish village of Össjö where she was the youngest of five sisters and brothers. 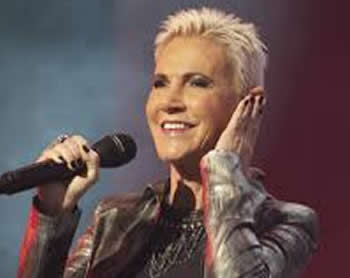 n Sverigetopplistan, and lead single "Tro" became the longest-charting song of her career on the Swedish Singles Chart, either as a solo artist or as part of Roxette; it reached number eight and spent a total of twenty-nine weeks on the chart. Her duet with Anni-Frid Lyngstad, "Alla mina bästa år" (English: "All My Best Years") – from Frida's 1996 album Djupa andetag (English: Deep Breaths) – was released as a single in February 1997.
Marie Fredriksson and Gessle collaborated on a new Roxette album throughout 1997 and 1998; Have a Nice Day was eventually released in February 1999. She was more involved in its composition and production than on previous Roxette releases, recording numerous demos at her Djursholm studio and singing lead vocals on ten of the album's fourteen songs. The record includes "Waiting for the Rain", the first Roxette song written and composed solely by Marie Fredriksson. Prior to its release, the duo signed a new recording contract with their long-term label EMI, which saw Marie Fredriksson obtaining full control of the copyrights to her entire discography. The process of recording the album was reputedly difficult and confrontational, with Marie Fredriksson later heavily criticising co-producer Michael Ilbert.
Her first greatest hits album, Äntligen – Marie Marie Fredrikssons bästa 1984–2000, was released in 2000, and was the second best-selling album of the year in Sweden. It was also one of the best-selling albums of 2001, and was certified triple platinum for shipments of almost 250,000 units. The two new songs recorded for the compilation, "Äntligen" (English: "Finally") and "Det som var nu" (English: "That What Was Now"), were both minor hits. The latter song featured Patrik Isaksson, and was a Swedish re-recording of a demo originally produced by Marie Fredriksson for Have a Nice Day. The record was promoted with a Swedish tour.
In 2001, Roxette released their seventh album, Room Service. Even though Ilbert was not present for this album's recording, Marie later said she "lost all desire to continue Roxette", and would appear at the recording studio as infrequently as possible; she instructed her taxi driver to wait outside while she recorded vocals for "Milk and Toast and Honey". The album was supported with a European tour, after which Marie Fredriksson "called for a meeting" with Gessle, wherein she discussed disbanding Roxette, to which Gessle agreed. She issued a box set containing all of her previous studio albums, Kärlekens guld (English: Love's Gold), in June 2002. Roxette scheduled the release of two new compilation albums, The Ballad Hits and The Pop Hits, which were to be promoted with performances at the 2002 edition of the pan-European orchestral concert series "Night of the Proms". A press conference announcing these appearances as Roxette's "swan song" was scheduled to take place in the Netherlands on 12th September 2002.

song:'Listen to Your Heart' by Roxette