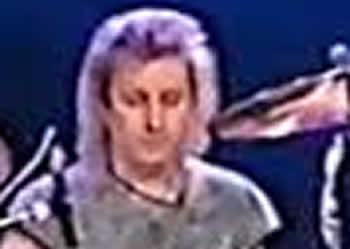 Robbie was born in Sheffield but emigrated to Australia where he studied at the National Academy of Rudimentary Drummers of Australia until 1974. At the age of fifteen, he began to teach at the Australian Academy of Music.
While living and travelling in Australia, Robbie France formed the jazz-fusion group, Carnival, performed at the Oz Jazz Festival, and supported guitarist John McLaughlin. He also worked with Stevie Wright of the Easybeats, Marty Rhone, Tim Gaze, and other major Australian artists. He amassed over 1,000 television, radio, and advertising credits, including eight documentaries and four film scores.
Robbie France left Australia in 1982 to return to England, where he joined Diamond Head the following year who performed at Castle Donington Monsters of Rock, then went on to record their third album, Canterbury. Robbie played on their hit single "Making Music". It was at this point where Robbie France was noticed as an extraordinary player. He performed at the first triple headliner drum clinic with Simon Phillips & Steve White, worked with Motown UK's C.E.O., 'Ivan Chandler's All Star Quintet' alongside Andy Hamilton. In 1984 Robbie France toured with UFO.
Leaving UFO in 1985, Robbie formed One Nation with Kipper (now Sting's producer) and Robbie stated, "Kipper is a true genius". They worked together at Tony Visconti's studio in Soho, London on a fabulous array of recordings. One Nation were being managed by Bill Lawrie, a well-known figure in the music trade. But the crunch came when Robbie France's wife, Annette, was asked to leave One Nation and he felt compelled to leave with her. By now Robbie France was also teaching in drum clinics, usually on behalf of the Avedis Zildjian cymbal company.
Robbie then set up a teaching studio in Kingston upon Thames, where he worked with Gary O'Toole, Hugo Degenhardt, Gary Wallis, Mike + The Mechanics, Power Station, 10cc, Jean Michel Jarre, The Style Council, Gary Ferguson, Mark Price and Tim Burgess.
Robbie France had started writing for magazines in Australia, at the age of fifteen. During 1987, he began a monthly column for the British drummer's magazine Rhythm. In 1987, Robbie France joined Ellis, Beggs, & Howard (E.B.H.), whose first single, "Big Bubbles No Troubles", won the Diamond Award for best new group. It was around this time that Robbie France was asked to fill in for drummer Frank Tontoh with jazz saxophonist Jean Toussaint. Meeting up to open a venue called The Soho Jazz Shack, Jean asked Robbie France to play with him on a more permanent basis, as he (Toussaint) had a regular slot at the Dingwalls club in Camden Town on Sunday afternoons.
After E.B.H., in 1990 Robbie France joined Wishbone Ash, with whom he toured and commenced the recording of the album 'Strange Affair'. However, friction occurred between Robbie France and Wishbone Ash bassist Martin Turner, resulting in Robbie France's dismissal from the band. He was replaced by Ray Weston, who was one of his students. Robbie then joined Anxious Records' band, Pleasure, touring as support act to the Eurythmics. By this time, however, Robbie France felt too drained to commit to any more touring or recording work.
In 1991, after working with Simon Ellis (East 17, D:Ream, S Club 7) and others, on the set pieces for his popular drum clinics, Robbie France returned to Australia to form a solo jazz project, The Gab. Based loosely as a tribute to the jazz greats Elvin Jones and John Coltrane, their first album was recorded at EMI Studio 301 in July 1993.
In 1994, Robbie returned to London, ostensibly to promote the solo project where he became a founder member of Skunk Anansie and recorded and co-produced their debut album 'Paranoid & Sunburnt'. He co-wrote the hit track "Weak", which was covered by Rod Stewart. He also recorded the B-side, "Army of Me", with Björk.
Robbie France left Skunk Anansie in 1995, joining the German group Alphaville the next day. He toured and recorded with Alphaville until an accident in which he severed his Achilles tendon. He lived in Poland for over two years, hosting his own radio programme, and appearing on various television shows. In 1998, he moved to Mazarrón, Spain, to concentrate on writing his first novel. He was running Pulpo Negro Records, Pulpo Negro