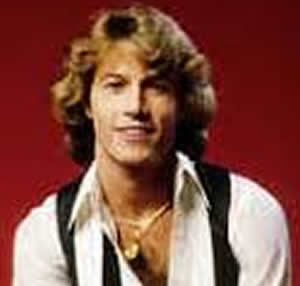 esult of myocarditis, an inflammation of the heart muscle caused by a recent viral infection. Five days before Andy had celebrated his birthday in London, U.K. while working on a new album. Soon after that he entered John Radcliffe Hospital in Oxford, U.K. complaining of chest pains.
Andy Gibb's body was returned to the United States, where he was interred at Forest Lawn Memorial Park in Hollywood Hills, Los Angeles. The headstone reads Andy Gibb / 5 March 1958 – 10 March 1988 / "An Everlasting Love". Robin Gibb also had a memorial tablet placed in the graveyard of St Mary's Church, Thame,U.K. which is close to where Robin himself is now buried .
Andy was born Andrew Roy Gibb on 5th March 1958 in Manchester, U.K. He was the youngest of five children of Barbara and Hugh Gibb. His mother was of Irish and English descent and his father was of Scottish and Irish descent. He had four siblings: his sister Lesley, and three brothers, Barry and fraternal twins Robin and Maurice.
At the age of six months, Andy emigrated with his family to Queensland, Australia, settling on Cribb Island just north of Brisbane. After being moved several times around Brisbane and Sydney, Andy returned to the United Kingdom in 1967 as his three older brothers began to gain international fame as the Bee Gees.
Andy left school at the age of thirteen, and with an acoustic guitar given to him by his older brother Barry, he began playing at tourist clubs around Ibiza, Spain, after his parents moved there), and later in the Isle of Man, his brothers' birthplace, when his parents were living there at the time.
In June 1974, Andy Gibb formed his first group, Melody Fayre, which included Isle of Man musicians John Alderson on guitar and John Stringer on drums. The group was managed by Andy's mother, Barbara, and had regular bookings on the small island's hotel circuit. Andy Gibb's first recording, in August 1973, was a Maurice Gibb composition, "My Father Was a Rebel", which Maurice also produced and played on. It was not released. Another track on the session performed by him was "Windows of My World" co-written by Andy with Maurice.
At the urging of his brother Barry, Andy Gibb returned to Australia in 1974. Barry believed that as Australia had been a good training ground for the Bee Gees it would also help his youngest brother. Lesley Gibb had remained in Australia, where she raised a family with her husband. Both Alderson and Stringer followed Andy to Australia with the hope of forming a band there. With Col Joye producing, Andy, Alderson and Stringer recorded a number of Andy's compositions. The first song was a demo called "To a Girl" (with his brother Maurice playing organ), which he later performed on his television debut in Australia on The Ernie Sigley Show. Sigley later informed the audience that it was from Andy 's forthcoming album, but it was never released. In November the same year, he recorded six demos – again produced by Joye – including "Words and Music", "Westfield Mansions" and "Flowing Rivers", which was later released.
Andy later joined the band Zenta, consisting of himself on vocals, Rick Alford on guitar, Paddy Lelliot on bass, Glen Greenhalgh on vocals, and Trevor Norton on drums. Zenta supported international artists Sweet and the Bay City Rollers on the Sydney leg of their Australian tours.
"Words and Music" was released on the ATA label only in Australia and New Zealand. It was Andy's first single, the song, backed by another Andy Gibb composition "Westfield Mansions". The single would eventually reach the Top Twenty on the Sydney music charts in 1976. Around this time, he married his girlfriend, Kim Reeder.
Robert Stigwood, who at the time was the Bee Gees's manager, signed Andy to his label, RSO Records in early 1976, after he had heard some of Andy's demo tapes. Andy soon moved to Miami Beach, Florida, U.S.A.to begin working on songs with his brother Barry and co-producrs Albhy Galuten and Karl Richardson. In 1976 in Miami, Andy, with older brother Barry producing and recording in the famed Criteria Studios, set about making his first album, Flowing Rivers with Eagles guitarist Joe Walsh playing on two songs. The first release from the album, and Andy's first single released outside Australia, was "I Just Want to Be Your Everything" which was written by Barry, who also provided backup vocals. It reached number one in the United States and Australia and was the most played record of the year. In Britain it was a lesser hit, just scraping into the Top 30. Eight of the ten tracks on the album were Andy Gibb compositions, mostly songs written during his time in Australia. These included a re-recording of his previous single, "Words and Music". In September 1977 Flowing Rivers, with another number one single "(Love Is) Thicker Than Water", also co-written by Andy and his brother Barry, to support it, quickly became a million selling album. That single broke in early 1978 during the time that the Bee Gees' contributions to the Saturday Night Fever soundtrack were dominating the world charts. In the United States it replaced "Stayin' Alive" at the top of the Hot 100 on the day before Andy's 20th birthday, only to be surpassed by "Night Fever" at number one there two weeks later.
On 25th January 1978, Andy had a daughter, Peta Jaye, but the couple had already separated before Kim discovered that she was pregnant. They divorced later that year. Andy then began work with the Gibb-Galuten-Richardson production team on his second album, Shadow Dancing, which was released in April 1978. The title tra

ck, written by all four Gibb brothers, was released as a single in the United States in April 1978. In mid-June it began a seven-week run at number one, achieving platinum status and the honour of being Billboard's number one song of 1978. In the United States, Andy became the first male solo artist to have three consecutive number one singles on the Billboard Hot 100, with all of the weeks at number one from those singles just barely inside a year, from 30th July 1977 through to 29th July 1978. Two further Top Ten singles, "An Everlasting Love" (which reached number five) and "(Our Love) Don't Throw It All Away" (which reached number nine), were released from the album, which became another million seller.
In 1979 Andy Gibb performed along with Bee Gees, ABBA, and Olivia Newton-John (duet with "Rest Your Love on Me") at the Music for UNICEF Concert at the United Nations General Assembly, which was broadcast worldwide. He returned to the studio to begin recording sessions for his final full studio album, After Dark. In March 1980 the last of Andy Gibb's Top Ten singles charted just ahead of the album's release. "Desire" (written by all four Gibb brothers) was recorded for the Bee Gees' 1979 album Spirits Having Flown and featured their original track, complete with Andy's original "guest vocal" track. A second single, "I Can't Help It", a duet with family friend and fellow British and Australian expat Olivia Newton-John, reached the top 20.
Later in the year, Andy Gibb's Greatest Hits was released as a finale to his contract with RSO Records, with two new songs: "Time Is Time" and "Me (Without You)" shipped as singles, before RSO founder Robert Stigwood had to let him go due to his cocaine addiction and behavioural problems. "After Dark" and "Will You Still Love Me Tomorrow" were non-single songs added to the album, the latter of which was a duet with P. P. Arnold, who had previously worked with Barry Gibb. During his relationship with actress Victoria Principal, Andy Gibb worked on several projects outside the recording studio, including performances in Andrew Lloyd Webber's Joseph and the Amazing Technicolor Dreamcoat on Broadway and Gilbert & Sullivan's The Pirates of Penzance in Los Angeles. He also co-hosted the television music show, Solid Gold, from 1980 to 1982.