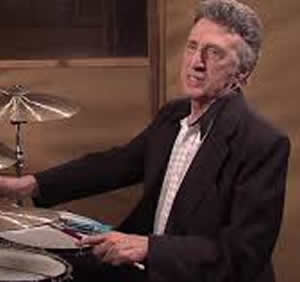 D.J.Fontana died aged eighty-seven on 13th June 2018 in Nashville, Tennessee, U.S.A.. when at the time of his death, he was suffering from complications of a broken hip.

D.J. was born Dominic Joseph Fontana on 15th March 1931 and was an American musician best known as the drummer for Elvis Presley.

In October 1954 he was hired to play drums for Elvis Presley and this marked the beginning of a fifteen-year musical relationship.

D.J. played on over 460 RCA cuts with Elvis. D.J. Fontana joined a band that was without a drummer. The band included Scotty Moore (lead guitar), Bill Black (bass), and Elvis Presley (rhythm guitar). They called themselves The Blue Moon Boys. This became the band that would perform and record the vast majority of Presley's hits of the 1950s.

Along with the occasional piano and backing vocals from the Jordanaires, The Blue Moon Boys played on several Elvis Presley hits, including "Heartbreak Hotel", "Hound Dog", "Don't Be Cruel", and "Jailhouse Rock".

The band toured extensively and throughout nineteen-fifty-six/seven the band made several television appearances, which included The Ed Sullivan Show. They broke up in 1958 and although the band had officially broken up, D.J. Fontana and Elvis still regularly played and recorded together throughout the 1960s. In 1968, D.J. Fontana performed on the NBC television special, often referred to as Elvis' 'Comeback' Special.

It was said of D.J.Fontana that "Armed with accuracy, power, swing, dynamics, great time and — the biggest compliment of all — simplicity whenever it was best, D.J. rocked the greatest singer and the greatest songs ... ever.

He did it year after year, record after classic record. In a world of one trick ponies and lucky "Rock Stars," D.J. was the real deal."
Scotty Moore and D.J. Fontana also performed together without Elvis Presley, including a 2001 recording of "That's All Right Mama" together with ex-Beatle Paul McCartney.