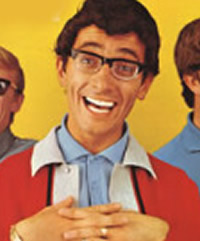 Freddie Garrity died aged sixty-nine in Bangor, North Wales, U.K. on 19th May 2006 after being taken ill while on holiday there. Freddie was cremated at the Carmountside Crematorium in Abbey Hulton, Stoke-on-Trent, Staffordshire, U.K. where his ashes are interred.
Freddy Garrity had continued to perform until 2001, when he was diagnosed with emphysema after collapsing during a flight; this forcing him into retirement.

With his health in decline, Freddie had settled in a bungalow in Newcastle-under-Lyme, Staffordshire, U.K. He had been married three times and had been a father four times.

Freddie Garrity was born in Crumpsall, Manchester, U.K., the eldest son of Frederick Garrity and Elsie Clynes.
Freddie worked as a milkman while playing in local skiffle groups: the Red Sox, the John Norman Four and, finally, the Kingfishers, who became Freddie and the Dreamers in 1959.

In the early years of the band, Freddie Garrity's official birth-date was given as 14 November 1940 to make him appear younger and, therefore, more appe

aling to the youth market who bought the majority of records sold in the UK.

Freddie Garrity's trademark was his comic dancing and his habit of leaping up and down during performances. This, combined with his almost skeletal appearance and horn-rimmed glasses, made him an eccentric figure in the UK pop scene of the early 1960s.

Freddie and the Dreamers disbanded in the late 1960s and, between 1971 and 1973, Freddie Garrity and his former bandmate Peter Birrell appeared in the ITV children’s television show Little Big Time. Freddie Garrity made a solo appearance on the first episode of the Granada Television production The Wheeltappers and Shunters Social Club singing "Try a Little Kindness" and "Good Morning Starshine", broadcast on 13 April 1974. In the Dear John sitcom, he appeared as himself for one episode in both the British original in 1987 and the American version in 1989 and, in 1993, he appeared in an episode of Heartbeat as a DJ, who played a Freddie and the Dreamers record, "I'm Telling You Now".


After his television career ended, Freddie Garrity formed a new version of Freddie and the Dreamers and toured regularly for the next two decades, but no further records or chart success came their way. He continued to perform until 2001, when he was diagnosed with emphysema after collapsing during a flight, thus forcing him into retirement.

song: 'I'm Telling You Now' by Freddie & the Dreamers