Lowell George died aged thirty-four on 29th June 1979 of a heart attack in his Arlington, Virginia, hotel room at the Twin Bridges Marriott. His body was 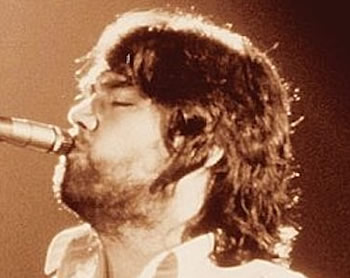 cremated in Washington, D.C. and his ashes were flown back to Los Angeles, California, U.S.A. where they were scattered from his fishing boat into the Pacific Ocean. Lowell was survived by his daughter Forrest, his first wife, Pattie, their son, Luke, a daughter, Inara.
Lowell George was born on the thirteenth of April 1945 in Hollywood, California, the son of Willard H. Lowell George, a furrier who raised chinchillas and supplied furs to the movie studios.
Lowell George's first instrument was the harmonica. At the age of six he appeared on Ted Mack's Original Amateur Hour performing a duet with his older brother, Hampton. As a student at Hollywood High School, where he befriended Paul Barrere and future wife Elizabeth, he took up the flute in the school marching band and orchestra. He had already started to play Hampton's acoustic guitar at age eleven, progressed to the electric guitar by his high school years, and later learned to play the saxophone, shakuhachi and sitar. During this period, Lowell George viewed the teen idol-oriented rock and roll of the era with contempt, instead favoring West Coast jazz and the soul jazz of Les McCann and Mose Allison. Following graduation in 1963, he briefly worked at a gas station (an experience that inspired such later songs as "Willin'") to support himself while studying art and art history at Los Angeles Valley College for two years.
Initially funded by the sale of his grandfather's stock, Lowell George's first band The Factory formed in 1965 and released at least one single on the Uni Records label, "Smile, Let Your Life Begin". Members included future Little Feat drummer Richie Hayward (who replaced Dallas Taylor in September 1966), Martin Kibbee (a.k.a. Fred Martin) who would later co-write several Little Feat songs with Lowell George (including "Dixie Chicken" and "Rock and Roll Doctor"), and Warren Klein on guitar. Frank Zappa produced two tracks for the band, but they were not released until 1993 on the album Lightning-Rod Man, credited to Lowell George and The Factory. The band made an appearance on the 1960s sitcom F Troop as "The Bedbugs". They were also featured in an episode of Gomer Pyle, U.S.M.C., "Lost, the Colonel's Daughter". They appeared in the scene inside the A-Go-Go club, with their music heard playing loudly. They received credits at the end of the episode as "'The Factory' Lowell-Warren-Martin-Rich, Courtesy of Universal Records". Following the disbanding of The Factory, Lowell George briefly joined The Standells.
In November 1968, Lowell George joined Zappa's Mothers of Invention as rhythm guitarist and nominal lead vocalist; he can be heard on Weasels Ripped My Flesh, Burnt Weeny Sandwich, You Can't Do That on Stage Anymore, Vol. 1, You Can't Do That on Stage Anymore, Vol. 4 and the first disc of You Can't Do That on Stage Anymore, Vol. 5. During this period, he absorbed Zappa's autocratic leadership style and avant garde-influenced conceptual/procedural-oriented compositional methods. He earned his first production credit (in conjunction with Zappa and Russ Titelman) on Permanent Damage, an album recorded by "groupie group" The GTOs. Lowell George later asserted that "he performed no real function in the band" and left the group in May 1969 under nebulous circumstances. GTOs member Pamela Des Barres has claimed that Lowell George was fired by the abstemious Zappa for smoking marijuana, while he claimed at a 1975 Little Feat concert that he was fired because he "wrote a song ["Willin'"] about dope." On the other hand, biographer Mark Brend asserts that Zappa "liked the song" but "thought there was no place for it in the Mothers' set"; Lowell George himself alternatively claimed that "it was decided that I should leave and form a band" by mutual agreement. Lowell George also claimed to have played uncredited guitar on Hot Rats.
After leaving the Mothers of Invention, Lowell George invited fellow musicians former Zappa bassist Roy Estrada, keyboardist Bill Payne and drummer Richie Hayward to form a new band, which they named Little Feat. Lowell George usually (but not always) played lead guitar and focused on slide guitar, but Ry Cooder played the slide on "Willin'" on the debut Little Feat album after Lowell George badly injured his hand while working on a powered model airplane, although Lowell George re-recorded some of his material and he played the rest of the slide work on the album. Mark Brend wrote that Lowell George's "use of compression defined his sound and gave him the means to play his extended melodic lines." Lowell George began his slide playing using the casing of a Sears, Roebuck and Co. 11/16ths spark plug socket wrench, ra

ther than the traditional glass or steel finger tube.
Little Feat signed to Warner Bros. Records through Zappa's efforts and their first album was Little Feat, produced by Russ Titelman, but it was not a commercial success and only sold 11,000 copies on initial release.
The follow-up album Sailin' Shoes, produced by Ted Templeman, was the band's first record to feature cover artwork by Neon Park, but despite good reviews and an improvement on its predecessor, the album fared no better commercially.
Estrada left the band in 1972 to join Captain Beefheart's Magic Band as well as to get away from the pollution in Los Angeles and he was replaced on bass by Kenny Gradney. In addition, Little Feat expanded to a sextet by adding a second guitarist Paul Barrere and percussionist Sam Clayton, thus cementing the classic line-up, and they took on a New Orleans funk direction with their next album Dixie Chicken, the first to be produced by Lowell George.
By the spring of 1976, Little Feat were touring North America opening for The Who.
When not playing with Little Feat, Lowell George lent his talents as a session player to various artists.
Along with The Meters, Lowell George's slide work features prominently on Robert Palmer's first solo studio album, Sneakin' Sally Through the Alley, recorded in New Orleans in 1974. A year later, Palmer's second album (Pressure Drop) was effectively produced by Lowell George, and Little Feat served as the core band on the sessions. However, Palmer kept the producer's credit because of a dispute between Island Records and Warners. Later CDs list Steve Smith as producer.