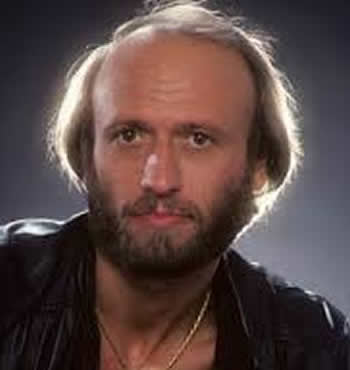 itions, "Walking on Air" and "Man in the Middle".
From 1967 to 1979, Maurice played bass guitar both studio and live. On live performances of the group, an additional musician is taking the bass part when Maurice switched to piano. He was less influential in the Bee Gees' disco sound of 1975 to 1979, when he primarily played bass. Maurice Gibb played Mellotron on several Bee Gees songs, most notably "Every Christian Lion Hearted Man Will Show You" and "Kilburn Towers" The piano on songs like "Words", "First of May" and "Lonely Days" is Maurice's. He played the Moog synthesizer on the song "Sweet Song of Summer" . Since 1987, he played keyboards on most of the songs in the group's performances, but still played bass or guitar occasionally.
Maurice Gibb debuted his career as an instrumentalist in 1964 on "Claustrophobia". Also he occasionally played lead guitar (including using the acoustic guitar given to him by John Lennon, which he used on "This Is Where I Came In", 2001). In the reunited Bee Gees from 1987 onward, Maurice was the group's resident expert on all technical phases of recording and co-ordinated musicians and engineers to create much of the group's sound. He also contributed lead guitar on the Bee Gees' recordings in 1966. His composition on which he played lead guitar was "Country Woman" which was the B-side for the group's hit, "How Can You Mend a Broken Heart", as well as some songs on 2 Years On including "Back Home", "Lay It on Me" and "Every Second, Every Minute".
On average, Maurice Gibb sang lead on one or two songs for each album album and he was the lead vocalist on some Bee Gees tracks including "On Time", "Lay It on Me", Closer Than Close, and his last song Man in the Middle. His first composition is "All by Myself" recorded in 1966 but not released until 1970 on Inception/Nostalgia. On the Bee Gees' performances of "Nights on Broadway", Maurice sang falsetto on it, rather than Barry who originally sang falsetto on the studio recording. He also showcases his singing career on his unreleased LP 'The Loner'.
As a songwriter, Maurice Gibb contributed primarily to melody, with his brothers writing the lyrics that they would sing on the finished song (for the most part). He was sometimes known as "the quiet one" for his less obvious contributions to the group, but privately he was a good teller of stories, who immensely enjoyed talking with fans. His reputation as a mild-mannered, stabilising influence with two very ambitious brothers continued through his life. His comic personality shone on stage during Bee Gees concerts when the brothers would perform an acoustic medley.

song: 'Turning Tide' by The BeeGees