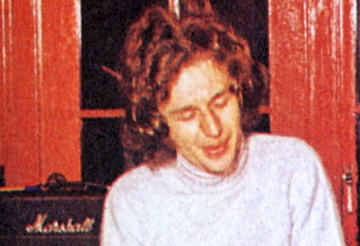 renal failure as a result of alcoholism. He had retired from music in 1977 and had moved back to Leicester, Leicestershire, U.K. Ric Grech was educated at Corpus Christi RC School, Leicester, after attending Sacred Heart Primary School. He played violin in the school orchestra.
Ric originally gained notice in the United Kingdom as the bass guitar player for the progressive rock group Family. He joined the band when it was a largely blues-based live act in Leicester known as the Farinas. He became their bassist in 1965, replacing Tim Kirchin. Family released their first single, "Scene Through The Eye of a Lens," in September 1967 on the Liberty label in the UK, which got the band signed to Reprise Records. The group's 1968 debut album 'Music in a Doll's House' was an underground hit that highlighted the songwriting talents of Roger Chapman and John "Charlie" Whitney as well as Chapman's piercing voice, but Ric Grech also stood out with his rhythmic, thundering bass work on songs such as "Old Songs New Songs" and "See Through Windows," along with his adeptness on cello and violin.
Released in February 1969, Family Entertainment, the group's second album, was a major turning point for Ric Grech personally. In addition to playing bass and violin, he wrote three of the album's other songs: "How-Hi-The-Li," "Face In the Cloud," and "Second Generation Woman," which was first released as a single in Britain in November 1968. This song featured Ric on lead vocals, leading Family through a cheeky lyric about a woman who "looks good to handle from a personal angle," with an arrangement that recalled the Beatles's "Paperback Writer" and owed an obvious debt to Chuck Berry. Tellingly, however, all of Ric Grech's songs contained obvious drug references - "How Hi-The-Li" wondered aloud if Chinese premier Chou En-Lai "gets high with all the tea in China" - and drugs would eventually plague Grech throughout his career.
In the spring of 1969, former Cream guitarist Eric Clapton and former Traffic frontman Steve Winwood formed the supergroup Blind Faith; in need of a bassist, they immediately recruited Grech, with whom they'd both jammed when Clapton was in John Mayall's Bluesbreakers and Winwood was in the Spencer Davis Group. However, Ric Grech failed to give Chapman and Whitney adequate notice, and Family was due to start a U.S. tour with Ten Years After. Ric Grech agreed to go on the tour until Family could replace him, but he proved to be unreliable when Family played their first American show on 8th April 1969 at the Fillmore East in New York, being so disoriented he could barely play.
Returning to England, Ric Grech recorded with the group the self-titled album, Blind Faith, with Clapton, Winwood, and drummer Ginger Baker, a former bandmate of Clapton's in Cream. The quartet toured the U.S. to support it. Eric Clapton was disappointed with the quality of the music and the performances, and Blind Faith called it quits. Ric Grech and Winwood stayed with Baker to form Ginger Baker's Air Force, a "supergroup" which also included Denny Laine (ex-Moody Blues) on guitar, Ch

ris Wood (ex-Traffic) on sax and flute, and several other musicians; when that group ended, Winwood reformed Traffic with original members Wood and Jim Capaldi, and Grech joined as their bassist.
In October 1969, between Blind Faith and Traffic, Ric Grech recorded two tracks for an unfinished solo project, "Spending All My Days" and "Exchange And Mart". Among the participants in the session was George Harrison. In 1970, he appeared on Graham Bond's album Holy Magick.
As in Family, Ric lasted two albums with Traffic — Welcome to the Canteen and The Low Spark of High Heeled Boys. Along with drummer Jim Capaldi, Ric Grech co-wrote the minor hit "Rock N Roll Stew." Drugs, however, remained a problem, and Winwood and his bandmates eventually decided they had no alternative but to dismiss him.
Ric Grech remained active in session work, playing with Rod Stewart, Ronnie Lane, Vivian Stanshall and Muddy Waters. He also worked with Rosetta Hightower, the Crickets, Bee Gees and Gram Parsons. In January 1973, he performed in Eric Clapton's Rainbow Concert, and he reunited with Roger Chapman and Charlie Whitney when the duo recorded an album in 1974 after Family's breakup. Ric Grech was one of many special guests on that record, which led Chapman and Whitney to form the group Streetwalkers. Ric Grech, however, was not in that band.
Ric made at least two reported attempts to start a new rock group in the seventies but both failed.
In 1973 RSO Records released the only album under his own name, credited to "Rick" Grech. The album was titled The Last Five Years. It contained songs that Ric Grech wrote and recorded with Family, Blind Faith, Traffic, Ginger Baker's Airforce and others between 1968 and 1973.
In 1974, Ric Grech joined KGB. Consisting of Grech on bass, Mike Bloomfield (ex-Paul Butterfield Blues Band and Electric Flag) on guitar, Carmine Appice (ex-Vanilla Fudge, Cactus and Beck, Bogert & Appice) on drums, Barry Goldberg on keyboards, and Ray Kennedy (co-writer of "Sail On, Sailor") on vocals, the group released its eponymous KGB, (Kennedy Grech Bloomfield) debut album that year.