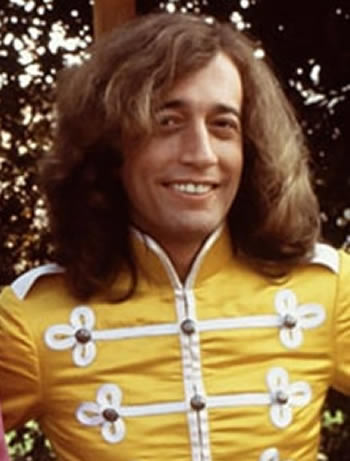 two from liver and kidney failure whilst in London, U.K.. His funeral was held on 8th June 2012 and he was buried at the Church of St Mary the Virgin, near his home in Thame, Oxfordshire, U.K.
In November 2011, Robin had been diagnosed with colorectal cancer, which had metastasised to his liver several months earlier. In an interview published in January 2012, Robin Gibb spoke for the first time of the cancer. He said that for more than eighteen months he had lived with an inflammation of the colon; and then was diagnosed with colon cancer, which spread to his liver. He had undergone chemotherapy, however, and the results — to quote his doctor — had been 'spectacular'. It had taken a toll, naturally, but the strange thing was is that he'de never felt seriously ill but mostly felt great.
In March 2012, Robin Gibb was hospitalised for intestinal surgery and cancelled scheduled appearances while recovering. In April, however, he contracted pneumonia and fell into a coma. Although he came out of his coma later in April, his colorectal cancer had advanced.
On 14th August 2010, while performing in Belgium, Robin began to feel abdominal pains. On 18th August, at an Oxford hospital, he underwent emergency surgery for a blocked intestine, the same condition that his brother, Maurice, suffered and died following surgery for the condition. Robin Gibb recovered and returned to perform concerts in New Zealand and Australia. During this time, Robin Gibb was also involved in promoting fund-raising for the memorial dedicated to RAF Bomber Command in Green Park, London. Robin continued to make television appearances and other events following his surgery, but in April 2011 he was forced by health problems to cancel his tour of Brazil. Another concert in Paris was cancelled in October 2011. On 14th October, Robin Gibb was due to perform the charity single with the Soldiers, but was again rushed to hospital with severe abdominal pains. On 18th October, following his release from the hospital, Robin appeared on ITV's The Alan Titchmarsh Show looking gaunt and frail.

bin Gibb dedicated the album to his mother, Barbara. 'My Favourite Christmas Carols' has a bonus DVD disc titled 'A Personal Christmas Moment with Robin Gibb'. Also in November 2006, Robin Gibb performed a solo concert, entitled 'Bee Gees – Greatest Hits' at the Araneta Coliseum in Manila, Philippines. Robin Gibb marked his return to his birthplace by playing a concert at the Isle of Man TT festival in 2007. Robin Gibb donated all of his share of the money from this concert to the children's ward at Noble's Hospital, Isle of Man, and invited all emergency service staff and marshals for the TT to attend for free.
On 18th May 2008, Robin Gibb released the song "Alan Freeman Days" in tribute to the Australian DJ Alan Freeman. The song was issued as a download only track, although a promotional CD was issued by Academy Recordings. In December 2008, "Alan Freeman Days" was followed by another downloadable song titled "Wing and a Prayer", which shared the same name as a song from the 1989 One album. However, the new song was actually a reworking of the song, "Sing Slowly Sisters", that had remained unreleased since 1970. Later in December, Robin Gibb issued another song, "Ellan Vannin (Home Coming Mix)", featuring the King William's College Choir from the Isle of Man. ("Ellan Vannin" is the Manx name for the Isle of Man.) On 8th September 2007, Robin Gibb performed at a concert in Salt Lake City, Utah at EnergySolutions Arena for the Nu Skin Enterprises Convention, singing a set of Bee Gees hits. On 25th October 2007, Robin Gibb performed at the National Palace of Culture in Sofia, Bulgaria and sang the Bee Gees' most famous songs.
In 2008, Robin Gibb completed a new solo album entitled 50 St. Catherine's Drive, but it was never released until 2014. On 25th October 2008, to mark the 30th anniversary of the song "Saturday Night Fever" topping the UK charts, Robin Gibb performed with special guests including Ronan Keating, Stephen Gateley, Sam Sparro, Sharleen Spiteri, Gabriella Climi and Bryn Christopher at the London music festival BBC Electric Proms. Robin Gibb went back to the top of the UK charts in 2009 when he collaborated with singers Ruth Jones, Rob Brydon and Tom Jones on a new version of "Islands in the Stream", written by Robin, Barry and MauriceGibb . The new version, inspired by the BBC comedy TV show Gavin & Stacey, was created to benefit the charity Comic Relief.
In 2010, Robin Gibb was also a guest mentor on the Australian version of The X Factor, alongside TV host Kyle Sandilands, actress/singer Natalie Imbruglia, and singers Ronan Keating and Guy Sebastian. Also in 2010, Robin Gibb toured in Australia with Bonnie Tyler as his supporting guest. Together they performed at Melbourne, Sydney, Brisbane and Perth. In September 2011, Robin Gibb recorded the Bee Gees classic "I've Gotta Get a Message to You" with British Army men The Soldiers for a charity single in the UK, it was produced with his son Robin John Gibb and the video for which was produced by Vintage TV. Robin Gibb was the subject of an edition of the BBC genealogy documentary series Who Do You Think You Are? first broadcast on 21st September 2011. On 30th January 2012, Robin Gibb announced his intention to appear on stage at the Coming Home Concert at the London Palladium in February to benefit British soldiers returning home from Afghanistan. It would be his last performance on stage. Over a period of two years, Robin Gibb and Robin-John wrote the score for The Titanic Requiem, recorded by Royal Philharmonic Orchestra to commemorate the 100th Anniversary of the sinking of the Titanic. Robin Gibb was due to attend the piece's premier on 10 April 2012 at the Central Hall, Westminster, London but his failing health kept him away.