Steve Gaines died aged twenty-eight on 20th October 1977 near Gillsburg, Mississippi, U.S.A. in a plane crash.. The crash also killed Ronnie Van Zant, Steve's sister Cassie Gaines, assistant road manager Dean Kilpatrick, pilot Walter McCreary, and co-pilot William Gray.
Steve Gaines was cremated and his ashes were buried in Orange Park, Florida, U.S.A. in 1977, but were relocated to an undisclosed location after vandals broke into his and bandmate Ronnie Van Zant's tombs in 2000.
Steve Gaines was born in Seneca, Missouri, U.S.A on 14th September 1949. When he was fifteen years old, he saw The Beatles live in Kansas City. After being driven home from the concert, he pestered his father enough to buy him his first guitar. His band, Manalive, recorded at the famous Sun Records Studio in Memphis, Tennessee. In 1975, he recorded several songs with Crawdad at Capricorn studios in Macon, Georgia which were released by MCA in 1988 as 'One in the Sun' and is listed as his only official solo album. 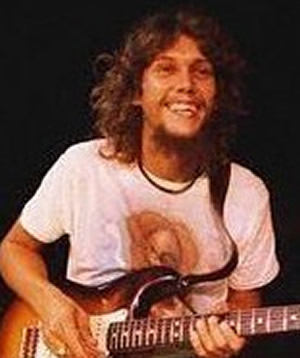 In December 1975, Steve's elder sister, Cassie, became a member of Lynyrd Skynyrd's female backup singers, The Honkettes. During this time, the band was in the midst of searching for a guitarist to replace Ed King, who left the band in mid-1975. Cassie recommended her brother, and after initial reluctance, the band allowed Steve to join them onstage for a show at Municipal Auditorium in Kansas City, Missouri in May 1976. The song was T-For Texas, (Blue Yodel #1) a Jimmie Rodgers song. Although the band themselves couldn't hear Steve's playing onstage, soundman Kevin Elson was listening through headphones and told the band that Steve was an outstanding player. They jammed with him informally a couple of times more, then invited him into the band just in time for the recording of Skynyrd's live album 'One More from the Road'. The first of three shows recorded for the album was Steve Gaines' third gig with the band.
Steve's guitar-picking and songwriting skills were a major revelation to the band, as proven on his one studio album, 1977's Street Survivors. Publicly and privately, Ronnie Van Zant marveled at the vocal and instrumental skill of Skynyrd's newest member, claiming that the band would "all be in his shadow one day". Steve's contributions included his co-lead vocal with Ronnie on the co-written "You Got That Right" (a solid hit single released after the plane crash) and the rousing guitar boogie "I Know a Little" which he had written before he joined Skynyrd. So confident was Skynyrd's leader of Steve's abilities that the album (and some concerts) featured Steve delivering his self-penned bluesy "Ain't No Good Life" – one of the few songs in the pre-crash Lynyrd Skynyrd catalogue to feature a lead vocalist other than Ronnie Van Zant.