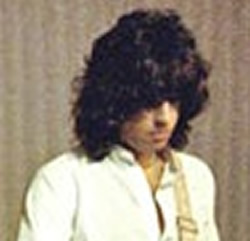 Tom Evans died aged thirty-six on 10th November 1983 when he hanged himself in his garden following a bitter argument with guitarist Joey Molland about the royalties for the song "Without You". Some of those who knew Tom stated that he had never gotten over fellow Badfinger member Pete Ham's suicide. Tom Evans is survived by his wife Marianne and his son, Stephen.

Tom Evans lived in Liverpool untill in July 1967 he was invited to audition in London for the Iveys. He eventually accepted and joined the Iveys in August 1967; his first gig with them being in August 1967 at the Starlite Ballroom in Crawley, Sussex, U.K.
In 1968, the Iveys were signed to the Beatles' Apple Records label. Their debut worldwide single release was Maybe Tomorrow, which was a Tom Evans composition, written for his girlfriend in Liverpool, Leslie Sandton, who he used to date when he was a member of Them Calderstones. On 15th November 1968, "Maybe Tomorrow" was released in the UK . The US release date was 27 January 1969 and the song peaked at No. 51 on the Cash Box chart and No. 67 on the Billboard chart. In the Netherlands, it reached No. 1. It was also very successful throughout Europe and in Japan.
One of the attempts at a follow-up single to Maybe Tomorrow was another Tom Evans composition called Storm in a Teacup, but this was rejected and ended up being used on a promotional Apple EP for Wall's Ice Cream in July 1969.
In November 1969, the Iveys changed their name to Badfinger, and Paul McCartney of the Beatles gave the group a boost by offering them his song "Come an

d Get It", which he produced for the band. It became a featured track for the film The Magic Christian, which starred Ringo Starr and Peter Sellers. Tom Evans was chosen by McCartney to sing lead on this track. It reached the Top 10 worldwide. The B-side, Rock of All Ages, co-written by Tom Evans with Pete Ham and Mike Gibbins, features Tom Evans singing lead. Paul McCartney also produced this, and even sang scratch vocals with Tom on the basic track.
After the departure of original bassist Ron Griffiths, the band fruitlessly auditioned a replacement and with the arrival of Liverpudlian guitarist Joey Molland, Tom Evans, who had previously played guitar, switched to bass.
Badfinger enjoyed more major successes in the early 1970s with singles such as "No Matter What," "Day After Day," and "Baby Blue". Each featured some of Tom Evans vocals; background harmony and dual lead. Tom Evans' high-career moment was with his composition "Without You," a song co-written with bandmate Pete Ham. The song became a No. 1 hit worldwide for Harry Nilsson and has since become a standard in the music industry.
Badfinger dissolved following Pete Ham's suicide in 1975, after which Tom Evans joined a group called the Dodgers with Badfinger bandmate Bob Jackson. The Dodgers released three singles produced by Muff Winwood and toured Britain before recording an album with producer Pat Moran. Tom Evans was eventually asked to leave the band midway through the recording sessions and he briefly retired from the music industry.
Tom Evans resurfaced in 1977 to join Joey Molland for two Badfinger "comeback" albums. The first single of two from the first album, "Airwaves," was a Tom Evans composition, "Lost Inside Your Love," but it failed to chart after its release in March 1979. The second album, "Say No More" spawned the Evans and Tansin single "Hold On," which reached No. 56 on Billboard in 1981. Tom Evans and Molland went their separate ways after this second album was released, and the two put together rival "Badfinger" touring bands in the USA.
In 1982, Jackson rejoined Tom Evans in the latter's version of Badfinger. Original Badfinger drummer Mike Gibbins was also enlisted for Tom Evans' band for one tour. But after Tom and Jackson signed separate management contracts with a Milwaukee businessman, the trio of Evans, Gibbins and Jackson said they found themselves stranded in the US without tour dates, food, or money, and under much duress from physical threats. After returning to Britain, Tom Evans was sued for five million dollars in damages for abandoning his touring contract.

Do you like this website? If so, then please copy and email the link:
http://www.rockapaedia.com  to your friends and aquaintances.
Thank you.

song: 'Without You' by Badfinger