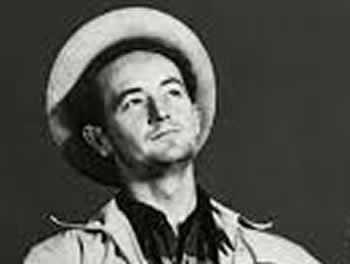 r II.
The years immediately after the war when he lived on Mermaid Avenue were among Woody Guthrie's most productive as a writer. His extensive writings from this time were archived and maintained by Marjorie and later his estate, mostly handled by his daughter Nora. Several of the manuscripts also contain writing by a young Arlo and the other Guthrie children. During this time Ramblin' Jack Elliott studied extensively under Woody Guthrie, visiting his home and observing how he wrote and performed. Elliott, like Bob Dylan later, idolized Woody Guthrie. He was inspired by the singer's idiomatic performance style and repertoire. Because of the decline caused by Woody's progressive Huntington's disease, Arlo Guthrie and Bob Dylan both later said that they had learned much of Woody Guthrie's performance style from Elliott. When asked about this, Elliott said, "I was flattered. Dylan learned from me the same way I learned from Woody. Woody didn't teach me. He just said: "If you want to learn something, just steal it; that's the way I learned from Lead Belly."
By the late 1940s, Woody Guthrie's health was declining, and his behavior was becoming extremely erratic. He received various diagnoses (including alcoholism and schizophrenia). In 1952, it was eventually found that he was suffering from Huntington's disease, a genetic disorder inherited from his mother. Believing him to be a danger to their children because of his behavior, Marjorie suggested he return to California without her and they eventually divorced.
Upon his return to California, Woody Guthrie lived at the Theatricum Botanicum, a summer-stock type theatre founded and owned by Will Geer. Together with singers and actors who had been blacklisted by HUAC, he waited out the anti-communist political climate. As his health worsened, he met and married his third wife, Anneke Van Kirk. They had a child, Lorinna Lynn. The couple moved to Fruit Cove, Florida, where they briefly lived. They lived in a bus on land called Beluthahatchee, owned by his friend Stetson Kennedy. Woody Guthrie's arm was hurt in an accident when gasoline used to start the campfire exploded. Although he regained movement in the arm, he was never able to play the guitar again. In 1954, the couple returned to New York. Shortly after, Anneke filed for divorce, a result of the strain of caring for Woody. She left New York after arranging for friends to adopt Lorinna Lynn. Lorinna had no further contact with her birth parents. She died in a car accident in California in 1973 at the age of 19. After the divorce, Woody's second wife, Marjorie, re-entered his life and cared for him until his death.
Increasingly unable to control his muscles, Woody was hospitalized until his death in 1967. During the final few years of his life, Woody Guthrie had become isolated except for family. The progression of Huntington's threw Woody Guthrie into extreme emotional states. By the time of his death, his work had been discovered by a new audience, introduced through Bob Dylan, Pete Seeger, Ramblin' Jack Elliott, his ex-wife Marjorie and other new members of the folk revival, and his son Arlo Guthrie.

song: 'This Land' by Woody Guthrie