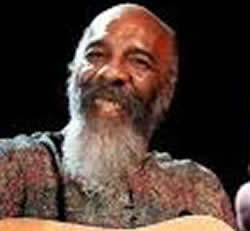 me in Jersey City, New Jersey, U.S.A. on 22nd April 2013. In 2010, Richie had kidney surgery but did not recover fully enough to perform as he had before. On March 20, 2012, he announced on his Facebook page that he would stop touring after 45 years due to health concerns.

As to Richie Havens's request, his remains were cremated and his ashes were scattered from the air over the original site of the Woodstock Festival, in a ceremony held on 18th August 2013, the 44th anniversary of the last day of the festival. He was survived by his wife Nancy, three children, five grandchildren, and two great-grandchildren.
Richie Havens was born in the Bedford-Stuyvesant neighborhood of Brooklyn, NewYork, U.S.A. He was the eldest of nine children. Richie was of Native American,Blackfoot, descent on his father's side and of the British West Indies on his mother's. His grandfather was Blackfoot of the Montana/South Dakota area. Richie Havens' grandfather and great-uncle joined Buffalo Bill's Wild West Show, got off in New York City, and ended up on the Shinnecock Reservation in Long Island. Richie Havens' grandfather got married, then moved to Brooklyn.

As a youth in Bedford-Stuyvesant, Richie Havens began organizing his neighborhood friends into street corner doo-wop groups and, at the age of sixteen, was performing with the McCrea Gospel Singers.
At the age of twenty, Richie Havens left Brooklyn, seeking artistic stimulation in Greenwich Village. He saw the Village as a place to escape to, in order to express himselfself he recalled. He had first gone there during the Beatnik days of the 1950s to perform poetry and then he drew portraits for two years and stayed up all night listening to folk music in the clubs. It took longer before he thought of picking up a guitar.

Richie Havens' solo performances quickly spread beyond the 'Village' folk circles. After cutting two records for Douglas Records, he signed on with Bob Dylan's manager, Albert Grossman, and landed a record deal with the Verve Folkways label. Verve released Mixed Bag in late 1966, which featured tracks such as "Handsome Johnn

y", "Follow", and "Just Like a Woman". Richie Havens released his first single, "No Opportunity Necessary", in 1967.
By 1969, he had released five more albums. Something Else Again became his first album to hit the Billboard charts, and it pulled Mixed Bag back onto the charts.

Richie Havens' live performances earned widespread notice. His Woodstock appearance in 1969 catapulted him into stardom and was a major turning point in his career. As the festival's first performer, he held the crowd for nearly three hours. In part, Havens was told to continue playing because many artists scheduled to perform after him were delayed in reaching the festival location with highways at a virtual standstill. He was called back for several encores. Having run out of tunes, he improvised a song based on the old spiritual "Motherless Child" that became "Freedom". In an interview with Cliff Smith, for Music-Room, he explained that he'd already played every song he knew and he was stalling, asking for more guitar and mic, trying to think of something else to play – and then it just came to him .
The subsequent Woodstock movie release helped Richie Havens reach a worldwide audience. He also appeared two weeks later at the Isle of Wight Festival, U.K. in late August 1969 .