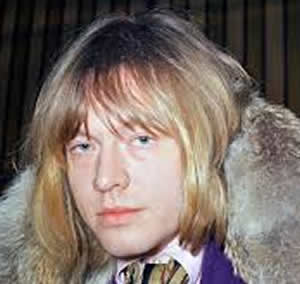 motionless at the bottom of his swimming pool at Cotchford Farm in the village of Hartfield in East Sussex, U.K. His Swedish girlfriend, Anna Wohlin, was convinced Brian was alive when he was taken out of the pool, insisting he still had a pulse. However, by the time the doctors arrived it was too late and he was pronounced dead. The coroner's report stated "death by misadventure" and noted his liver and heart were heavily enlarged by drug and alcohol abuse.
The Rolling Stones performed at a free concert in Hyde Park on 5th July 1969, two days after Brian Jones's death. The concert had been scheduled weeks earlier as an opportunity to present the Stones' new guitarist, Mick Taylor, and the band decided to dedicate the concert to Brian Jones. Before the Rolling Stones' set Jagger read excerpts from "Adonais", a poem by Percy Bysshe Shelley about the death of his friend John Keats, and stagehands released hundreds of white butterflies as part of the tribute. The Stones opened with a Johnny Winter song that was one of Brian Jones's favourites, "I'm Yours and I'm Hers".
Brian Jones was reportedly buried 10 feet (3 m) deep in Cheltenham Cemetery. His body was embalmed, hair bleached white, and was placed in an air-tight metal casket. Watts and Wyman were the only Rolling Stones who attended the funeral. Mick Jagger and Marianne Faithfull were travelling to Australia to begin the filming of Ned Kelly; they stated that their contracts did not allow them to delay the trip to attend the funeral.

, London and then at Ethan Russell's photographic studio in South Kensington. The photos would appear on the album 'Through The Past Darkly (Big Hits Vol.2)' in September 1969.
The Stones decided that following the release of the Let it Bleed album (scheduled for a July 1969 release in the US) they would start a North American tour in November 1969. However, the Stones management was informed that because of his drug convictions Brian Jones would not receive a work permit. At the suggestion of pianist and road manager Ian Stewart, the Stones decided to add a new guitarist and, on 8th June 1969, Brian Jones was visited by Mick Jagger, Keith Richards, and Charlie Watts and was told that the group he had formed would continue without him.
To the public it appeared as if Brian Jones had left voluntarily; the other band members told him that although he was being asked to leave it was his choice how to break it to the public. Brian Jones released a statement on 9th June 1969, announcing his departure. In this statement he said, among other things, that "I no longer see eye-to-eye with the others over the discs we are cutting". Jones was replaced by 20-year-old guitarist Mick Taylor, formerly of John Mayall's Bluesbreakers.
During the period of his decreasing involvement in the Rolling Stones Brian Jones was living at Cotchford Farm in East Sussex, the residence formerly owned by Winnie-the-Pooh author A. A. Milne which Brian Jones had purchased in November 1968. Alexis Korner, who visited in late June, noted that Brian Jones seemed "happier than he had ever been". Brian Jones is known to have contacted Korner, Ian Stewart, John Lennon, Mitch Mitchell, and Jimmy Miller about intentions to put together another band. Brian Jones had apparently demoed a few of his own songs in the weeks before his death, including "Has Anybody Seen My Baby?" and "Chow Time".