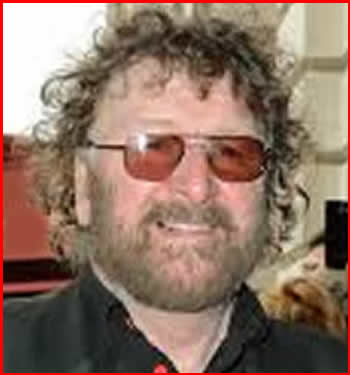 d September 2018 in England, U.K.
Chas Hodges was born Charles, Nicholas Hodges in North London, U.K. on 28th December 1943. His father, a lorry driver, killed himself the day before Chas' fourth birthday. After his father's death, the family returned to Edmonton in North London to live with his grandparents and his mother made a living playing piano in local pubs and clubs. Chas first became interested in Rock 'n' Roll music after listening to Little Richard on Radio Luxembourg in around 1956. He was then inspired by Lonnie Donegan to learn to play the guitar when he was twelve, and joined a skiffle band a year later in 1957, The Horseshoe Skiffle Group. In May 1958, he attended a Jerry Lee Lewis concert and became interesting in learning to play the piano. He worked for a while in a jeweller's shop after leaving school.
Chas Hodges became a professional musician by the age of 16, playing bass guitar with various local bands until he joined Billy Gray and the Stormers in 1960. After Billy Gray and the Stormers broke up, Chas worked with the producer Joe Meek who put him and his former band together as backing band for Mike Berry, forming the Outlaws. They were later joined by Ritchie Blackmore. They also worked as session musicians, backing Jerry Lee Lewis, Bill Haley and Gene Vincent. Chas Hodges claimed that he learnt the piano by watching Jerry Lee Lewis whilst backing him. During this time, Chas became known as "Sleepy" after his habit of falling asleep during the recording process. The Outlaws broke up, and he was invited to join Cliff Bennett and the Rebel Rousers as a bass player in 1965.
Chas Hodges had known Dave Peacock for a number of years; they met in 1963 when a friend of Dave gave Chas a lift home and found they had similar taste in music. After the Rebel Rousers, Chas Hodges joined Peacock, Harvey Hinsley and Mick Burt in Black Claw. In 1970, Albert Lee asked him to join a new band Heads Hands & Feet, who supported Blackmore's subsequent band Deep Purple on tour. He played bass with Purple for one show in 1971, at Music Hall Aberdeen, substituting for the regular bassist, Roger Glover who was ill.
Chas Hodges toured America when he was with Heads Hands & Feet, and it was during the tour that he began to have the idea of performing in his natural accent as he thought it "not quite real" performing in an American accent to an American audience. When Heads Hands & Feet broke up in 1972, Chas Hodges and Dave Peacock considered forming a band together, singing in their own accent about things they knew and they began to perform as the duo Chas & Dave. Chas Hodges was originally a bass player, but in Chas & Dave he played the piano and guitar while Dave Peacock played bass. They also recorded as Oily Rags with Gerry Hogan and Ian Wallace, and releasing a self-titled album in 1974. In 1975 Chas Hodges and Peacock played on Labi Siffre's album Remember My Song.
Chas Hodges and Dave Peacock recorded their first album as Chas & Dave in 1974, and this album, One Fing'*'Anuvver, was released in 1975. According to Chas, the title track "One Fing'*'Anuvver" was their first Rockney song. Burt joined the duo in 1976 as a drummer. They were signed by EMI in 1978, and the album Rockney was released the same year. A song from the album, "Strummin'", was their first song to reach the chart. In early 1979, a song from their first album "Woortcha!" was

used used for a notable television commercial for Courage Bitter, and the song was then re-recorded and released as a single, retitled "Gertcha". They opened for Led Zeppelin at the 1979 Knebworth Festival in U.K.
In 1980, Chas & Dave formed their own record label Rockney with their manager Bob England. Their first release under this label "Rabbit" became a top 10 hit. They had a bigger hit song in 1982 with "Ain't No Pleasing You", written largely by Chas Hodges.
Chas was popular amongst supporters of Tottenham Hotspur Football Club owing to singles he had released as Chas & Dave. These include "Glory Glory Tottenham Hotspur", "Hot Shot Tottenham!", "When the Year Ends in One", "Spurs Medley" and "Ossie's Dream".
Chas also played piano for short-lived supergroup called the Rockers, which featured Roy Wood, Phil Lynott and John Coghlan.
In 2009, following the death of his wife Sue, Dave Peacock announced his retirement from performing with Chas & Dave. However, he changed his mind the following year and announced a tour for 2011.
They also played their "Christmas Jamboree" at the Indig O2 in December 2011 and December 2012. They undertook a 'Back By Demand' tour of the UK between February and May 2013. In 2012, Chas Hodges wrote and recorded a charity single with his band and 2012 Premier League Darts players called "Got My Tickets for the Darts". The video featured Chas, his band, the 2012 Premier League Darts players, and walk-on girl Jacqui Adams. It was released on 18th May, the night after the play-offs at the O2 arena in London, where it was premiered, and proceeds from the single were donated to the Haven House Children's Hospice, in Woodford Green, Essex, U.K..
In 2009 Chas Hodges released an eponymous solo album on Talking Elephant Records. In 2010, he guested on an album by Vince Eager called 788 Years of Rock n Roll. The following year Chas Hodges returned to the label to record a solo album titled Together We Made Music. In 2014, Chas also guested on Simon Fowler's new band Merrymouth's album, Wenlock Hill, contributing piano on the song "Salt Breeze".