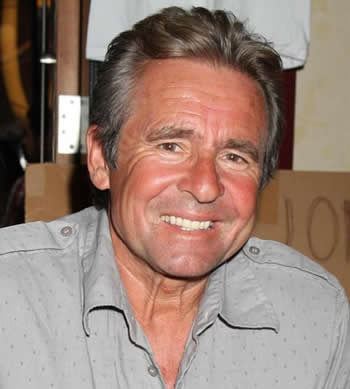 2 at Martin Memorial South Hospital in Stuart, Florida, U.S.A. where he was pronounced dead of a severe heart attack resulting from arteriosclerosis.
Davey had gone to tend his fourteen horses at a farm in Indiantown, Florida and after riding one of his favourite horses around the track, he had complained of chest pains and had difficulty breathing.
On Wednesday, 7th March 2012, a private funeral service was held at Holy Cross Catholic parish in Indiantown, Florida. The three surviving Monkees did not attend in order to avoid drawing attention from the grieving family. Instead, the group attended memorial services in New York City as well as organising their own private memorial in Los Angeles along with Davey Jones's family and close friends. Additionally, a public memorial service was held on 10th March 2012 in Beavertown, Pennsylvania, near a church Davey Jones had purchased for future renovation.
On Monday 12th March 2012, a private memorial service was held in Openshaw, Manchester, U.K. at Lees Street Congregational Church where Davey had performed as a child in church plays. Davey Jones' wife and daughters travelled to England to join his relatives based there for the service, and placed his ashes on his parents' graves temporarily.

Davey Jones was born David Thomas Jones in Manchester, Lancashire, U.K. on 30th December 1945.
Davey was married three times. In December 1968, he married Dixie Linda Haines, with whom he had been living. Their relationship had been kept out of the public eye until after the birth of their first child in October 1968. It caused a considerable backlash for Davey from his fans when it was finally made public. Jones later stated in Tiger Beat magazine that he had kept his marriage a secret because he believed stars should be allowed a private life. Davey and Dixie had two daughters named Talia Elizabeth and Sarah Lee. However, Their marriage ended in 1975.
Davey Jones married his second wife, Anita, on 24th January 1981, and also had two daughters with her named Jessica Lillian and Annabel Charlotte. They divorced in 1996 during the Monkees' 30th Anniversary reunion tour. Davey Jones married for a third time during August 2009 to Jessica, thirty-two years his junior. They were still married when he died.
Davey's television acting debut was on the British television soap opera Coronation Street. He portrayed Colin Lomax, Ena Sharples' grandson, for one episode in 1961. He also appeared in the BBC police series Z-Cars. After the death of his mother from emphysema when he was fourteen years old, Davey rejected acting in favour of a career as a jockey and dropped out of secondary school to begin his career in that field. This career was short-lived, however. Even though his trainer believed Davey would be successful as a jockey, he encouraged his young protégé to take a role as the Artful Dodger in a production of Oliver! in London's West End, a move which changed Davey's life forever.
Davey played the role in London and then on Broadway and was nominated for a Tony Award. On 9th February 1964, Davey appeared in the U.S.A. on The Ed Sullivan Show with Georgia Brown who was playing Nancy in the Broadway production of Oliver!. This was the same episode of the show in which the Beatles made their first appearance. Davey said of that night that he watched the Beatles from the side of the stage and saw the girls going crazy, and he said to himself, "this is it, I want some of that."
Following his Ed Sullivan appearance, Davey Jones signed a contract with Ward Sylvester of Screen Gems (then the television division of Columbia Pictures). A pair of American television appearances followed, as Davey Jones received screen time in episodes of Ben Casey and The Farmer's Daughter.
Davey Jones debuted on the Billboard Hot 100 in the week of 14th August 1965, with the single "What Are We Going To Do?" The nineteen-year-old singer was signed to Colpix Records, a label owned by Columbia. His debut album, David Jones, on the same label, followed soon after. In 1967 the album was issued in the UK, in mono only, on the Pye Records label.
From 1966 to 1971, Davey Jones was a member of the Monkees, a pop beat group formed expressly for a television show of the same name. With Screen Gems producing the series, Davey was shortlisted for auditions, as he was the only Monkee who was signed to a deal with the studio, but still had to meet the producer's standards. Davey Jones sang lead vocals on many of the Monkees' recordings, including "I Wanna Be Free" and "Daydream Believer". The DVD release of the first season of the show contained commentary from the various bandmates. Mostly playing tambourine or maracas, Davey Jones filled in briefly for Peter Tork on bass when he played keyboards. The NBC television series the Monkees was popular, and remained in syndication. After the group disbanded in 1971, Davey Jones reunited with Micky Dolenz as well as Monkees songwriters Tommy Boyce and Bobby Hart in 1974 as a short-lived group called Dolenz, Jones, Boyce & Hart.
A Monkees television show marathon ("Pleasant Valley Sunday") broadcast on 23rd February 1986 by MTV resulted in a wave of Monkeemania not seen since the group's heyday. Davey Jones reunited with Micky Dolenz and Peter Tork from 1986 to 1989 to celebrate the band's renewed success and promote the 20th anniversary of the group. A new top 20 hit, "That Was Then, This Is Now" was released as well as an album called 'Pool It'.
Monkees activity ceased until 1996 when Davey Jones reunited with Dolenz, Tork and Michael Nesmith to celebrate the 30th anniversary of the band. The group released a new album entitled 'Justus', the first album since 1967's Headquarters that featured the band members performing all instrumental duties. It was the last time all four Monkees performed together.
In February 2011, Davey Jones confirmed rumours of another Monkees reunion. The tour Davey Jones's last, came to fruition entitled, An Evening with The Monkees: The 45th Anniversary Tour.
In 1967, Davey Jones opened his first store, called Zilch, at 217 Thompson Street in the Greenwich Village section of New York City. The store sold "hip" clothing and accessories and also allowed customers to design their own clothes.
After the Monkees officially disbanded in 1971, Davey Jones kept himself busy by establishing a New York City-style street market in Los Angeles, called "The Street". He also collaborated with musical director Doug Trevor on a one-hour ABC television special entitled Pop Goes Davy Jones, which featured new artists of the time; The Jackson 5 and the Osm

onds.
Bell Records, then having a string of hits with The Partridge Family, signed Davey Jones to a somewhat inflexible solo record contract in 1971. Davey was not allowed to choose his songs or producer, resulting in several lacklustre and aimless records. His second solo album, Davy Jones in 1971 was notable for the song "Rainy Jane", which reached number 52 in the Billboard charts. To promote the album, Davey performed "Girl" on an episode of The Brady Bunch entitled "Getting Davy Jones". Although the single sold poorly, the popularity of Davey's appearance on the show resulted in "Girl" becoming his best-remembered solo hit, even though it was not included in the album.
Thanks in part to re-runs of The Monkees on Saturday mornings, The Monkees Greatest Hits charted in 1976.
Dolenz and Jones took advantage of this, joining ex-Monkees songwriters Tommy Boyce and Bobby Hart to tour the United States. From 1975 to 1977, as the "Golden Hits of The Monkees" show. They successfully performed in smaller venues such as state fairs and amusement parks as well as making stops in Japan, Thailand, and Singapore. They also released an album of new material appropriately as Dolenz, Jones, Boyce & Hart, additionally a live album Concert in Japan was released by Capitol in 1976.
In June 1997, during a concert at the Los Angeles Coliseum, Davey joined U2's The Edge onstage for a karaoke performance of "Daydream Believer," which had become a fixture of the band's set during that year's PopMart Tour.
In 2001, Davey released 'Just Me', an album of his own songs, some written for the album and others originally on Monkees releases. In the early 2000s he was performing in the Flower Power Concert Series during Epcot's Flower and Garden Festival, a yearly gig he would continue until his death.
In April 2006, Davey Jones recorded the single "Your Personal Penguin", written by children's author Sandra Boynton, as a companion piece to her new board book of the same title. In 2009, Davey Jones released a collection of classics and standards from the 1940s through the 1970s entitled 'She'.
In 2009, Davey Jones was rated number-two in a list of ten best teen idols compiled by the American Fox News Channel.
<<go to top>>