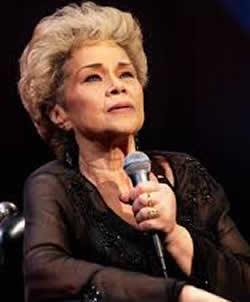 ele.
Her song "Something's Got a Hold on Me" has been recognized in many ways. Brussels music act Vaya Con Dios covered the song on their 1990 album Night Owls. Another version, performed by Christina Aguilera, was in the 2010 film Burlesque. Pretty Lights sampled the song in "Finally Moving", followed by Avicii's dance hit "Levels", and again in Flo Rida's single "Good Feeling".
Etta James encountered a string of legal problems during the early 1970's due to her heroin addiction. She was continuously in and out of rehabilitation centers, including the Tarzana Treatment Centers, in Los Angeles, California. Her husband Artis Mills, whom she married in 1969, accepted responsibility when they were both arrested for heroin possession and served a 10-year prison sentence. He was released from prison in 1981 and was still married to Etta James at her death.
In 1974, Etta James was sentenced to drug treatment instead of serving time in prison. She was in the Tarzana Psychiatric Hospital for seventeen months, at the age of thirty-six, and went through a great struggle at the start of treatment. In her autobiography, she said that the time she spent in the hospital changed her life. After leaving treatment, however, her substance abuse continued after she developed a relationship with a man who was also using drugs. In 1988, at the age of fifty, she entered the Betty Ford Center, in Palm Springs, California, for treatment. In 2010, she received treatment for a dependency on painkillers. Etta James had two sons, Donto and Sametto. Both started performing with their mother — Donto played drums at Montreux in 1993, and Sametto played bass guitar in 2003.
Etta James was hospitalized in January 2010 to treat an infection caused by MRSA, a bacterium resistant to most antibiotics. During her hospitalization, her son Donto revealed that she had received a diagnosis of Alzheimer's disease in 2008.

song: 'Only Time Will Tell' by Etta James.