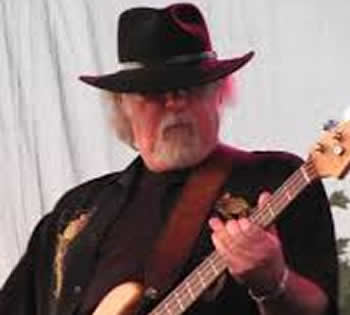 Florida, U.S.A. He was survived by his wife Thania. The news was announced on Sunday, 6th October via a statement shared on .38 Special’s Facebook page, a band Larry had played with from 1977 until his retirement in 2014.
“The Big Man on the Big Bass has left us,” the tribute message began. “He rocked arenas all over the world and succeeded in living his dream. He was truly one of a kind, a congenial travelling companion and a great friend to all with a humorous slant on life that always kept our spirits high – a kind man with a big heart for everyone who crossed his path. There will never be another like him. We are sending our devoted love, strength and comfort to his wife Thania and Larry’s family. We will miss our friend and partner.”
Larry Junstrom, a founding member of Lynyrd Skynyrd and longtime bassist for the band .38 Special, was born on 22nd June, 1949 in Pittsburgh, Pennsylvania, U.S.A. Larry Junstrom began his musical career in the mid-’60s playing in early versions of Lynyrd Skynyrd — alternately known as My Backyard, the Noble Five and the One Percent — alongside Ronnie Van Zant, Garry Rossington, Bob Burns and Allen Collins. They eventually chose their more familiar name as a sarcastic homage to their Jacksonville high school gym teacher, Leonard Skinner, who was notorious for checking the length of the boy's hair.
Larry departed the group before they recorded their debut album, Pronounced Leh-nerd Skin-nerd, in 1973. Leon Wilkeson ultimately handled the bass duties through the height of the band’s fame.
.38 Special is an American rock band that was formed by neighborhood friends Don Barnes and Donnie Van Zant in 1974 in Jacksonville, Florida.
Nevertheless, Van Zant, Barnes and Lyons, while continuing their day jobs and working in other bands, began working on composing original songs in their spare time.
The group spent most of 1975 and 1976 playing a steady grind of one-nighters, mostly in the South and the Midwest. Eventually, big brother Ronnie figured Donnie and the gang had paid enough dues and set them up with Skynryd's manager Peter Rudge, who also handled the Who, and was tour manager for the Rolling Stones. Rudge quickly set the group up to open shows for red-hot acts, like Peter Frampton, Foghat and Kiss, and got them signed to A & M Records, who assigned Dan Hartman (of Edgar Winter Group fame) to produce their first album, 38 Special, which was released in May 1977.
Just before the record's release, bassist Ken Lyons decided to leave the band and was replaced by their friend and original Lynyrd Skynyrd member Larry Junstrom, who had contributed to one track of their debut.
The band's first two albums had a strong Southern rock influence. By the early 1980s, 38 Special had shifted to a more accessible guitar-driven arena rock style without completely abandoning its Southern rock roots. This shift helped to usher in a string of successful albums and singles. Engineer Rodney Mills, who'd worked with Atlanta Rhythm Section and others, assumed the producer's reins from here on and Survivor co-founder Jim Peterik became a frequent songwriting collaborator of the band's from 1979 on, which helped account for this change in sound and subsequent success.
"Rockin' into the Night", the title track from the group's third album (released in October 1979), which Peterik and his bandmates had originally written for Survivor, was instead given to 38 Special. Sung by 38's guitarist Don Barnes (who would sing lead vocals on all of the band's hits through 1987), the tune became their first song to receive national airplay, peaking at #43 on Billboard magazine's singles chart in early 1980.
This paved the way for their platinum supercharged fourth record, Wild-Eyed Southern Boys in January 1981, and its big hit "Hold On Loosely" , which reached number 27 in 1981.
Their next release, 'Special Forces' in May 1982, contained the Top 10 smash "Caught Up in You" (just like "Hold On Loosely", composed by Barnes and Carlisi with Peterik) which hit Number 1 on Billboard magazine's Album Rock Tracks chart, as did the single, "If I'd Been the One" from October 1983, from their November 1983 release Tour de Force. "You Keep Runnin' Away" , August 1982, and "Back Where You Belong", February 1984, continued the sequence of hit radio favorites.
In the fall of 1984, they had another hit with "Teacher, Teacher", from the soundtrack of the 1984 film Teachers, written by Jim Vallance and Bryan Adams. The song climbed to number 4 on the Billboard Top Tracks Chart, spending ten weeks in the charts.
In 1984 38 Special toured with newcomers Huey Lewis and the News just as their career was catching fire and in 1986 they shared the bill with Bon Jovi just as they were taking off as well.
By 1987, Don Barnes had decided to leave .38 to go out on his own. He recorded an album called Ride the Storm, which, though slated for release in 1989, was shelved after A & M Records was sold and did not see the light of day until 2017–twenty eight years later.
In the meantime, the group moved on, bringing in guitarist Danny Chauncey, after drummer Steve Brookins also decided to leave, and singer/keyboardist Max Carl, fr

om West Coast rhythm and blues unit Jack Mack & the Heart Attack.
The next release, Rock & Roll Strategy in June 1988, saw the group playing down their heavy guitar sound and putting forth a more '80s pop keyboard-oriented approach, led by Carl's more R&B-style voice. "Second Chance" (taken from Rock & Roll Strategy) was a No. 1 hit on Billboard's adult contemporary chart in early 1989.
Carl was also lead singer on "The Sound of Your Voice" from Bone Against Steel in July 1991, which saw the group moving from A & M to the British label Charisma Records. That same year, Bobby Capps came aboard as keyboardist/co-singer and drummer Scott Meeder replaced Jack Grondin after the latter decided to leave the music business. The band found themselves without a home after Charisma folded in 1992.
After touring with the band through the spring of 1992, Max Carl decided to depart, making way for the return of Don Barnes. Since that time, the band has mostly concentrated on touring, with an occasional release of new material. Scott Hoffman took over the drum chair from Meeder later in 1992. Donny Baldwin (ex-Jefferson Starship) filled in for Hoffman on some 1996 tour dates after Hoffman was down with a broken arm, but Gary "Madman" Moffatt (formerly of Cactus) has been the band's drummer since 1997.
In late 1996, 38's long time guitarist/co-founder Jeff Carlisi, tired of the endless touring, decided to leave to form the Bonnie Blue Band, which led to the supergroup, Big People, which also featured Benjamin Orr (from the Cars), Liberty DeVitto (from Billy Joel's band), Derek St. Holmes (ex-Ted Nugent) and Pat Travers. Unfortunately Big People failed to launch.
38 Special, though, continued on and "Fade to Blue" from the album Resolution (June 1997), released on the small Razor & Tie label, made it to #33 on the Mainstream Rock chart in 1997.
During the summer of 1998, Donnie was sidelined after a leg injury and the band continued touring without him until he was healed enough to return to the road.
Since 1997's Resolution, two more releases have followed on the CMC International and Sanctuary Records labels, respectively A Wild-Eyed Christmas Night (September 2001) and Drivetrain (July 2004).