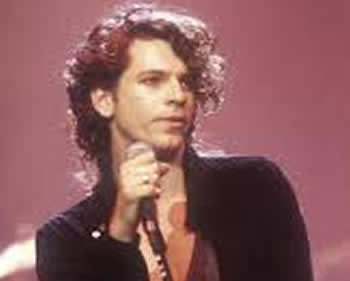 On 6th February 1998, after an autopsy and coronial inquest, New South Wales State Coroner, Derrick Hand, presented his report which ruled that Michael Hutchence's death was a suicide while depressed and under the influence of alcohol and other drugs.
Former girlfriend Kym Wilson and Andrew Reyment, her then current boyfriend, were the last people to see Michael Hutchence alive when they left him at 4:50 am. He was then awaiting a phone call from Paula Yates in London concerning whether she would bring their daughter Tiger to Australia. At 9:54 am he talked to his former longtime girlfriend, Michèle Bennett, who has stated that he was crying, sounded upset and had said he needed to see her. She arrived at his door at about 10:40 am, but there was no response. Michael Hutchence's body was discovered by a hotel maid at 11:50 am. Police reports state that Michael was in a kneeling position facing the door and he had used his snake skin belt to tie a knot on the automatic door closure at the top of the door, and had strained his head forward into the loop so hard that the buckle had broken.
After Michael's death, Bob Geldof and Paula Yates each gave police statements on the phone calls they exchanged with Michael that morning. Paula's statement on 26th November included "He was frightened and couldn't stand a minute more without his daughter. He was terribly upset and said he didn't know how he'd live without seeing Tiger. Her statement said that she had informed Michael Hutchence of the custody hearing being adjourned until 17th December, and that consequently she would not be bringing their daughter out to Australia as previously intended.
On 27th November 1997, Michael Hutchence's coffin was carried out of St. Andrew's Cathedral by members of the band and his younger brother Rhett. "Never Tear Us Apart" was played in the background. Nick Cave, a friend of Michael, performed his 1997 song "Into My Arms" during the funeral and requested that television cameras be switched off. Michael's ashes were scattered on Rose Bay in Sydney Harbour.

him, causing him to fall backwards and hit his head on the roadway. Michael Hutchence suffered a fractured skull in the altercation. Michael Hutchence did not immediately seek medical assistance for the injury, instead waiting several days before seeing a doctor. As a result, Michael Hutchence's fractured skull left him with an almost complete loss of the sense of smell and significant loss of taste. This injury led to periods of depression and increased levels of aggression; he did not fully recover after two weeks in a Copenhagen hospital. According to INXS bandmate Beers, Michael Hutchence pulled a knife and threatened to kill him during the 1993 recording of Full Moon, Dirty Hearts on the isle of Capri. Beers said that over those six weeks, Michael threatened or physically confronted nearly every member of the band.
In the mid-nineteen-nineties, Michael Hutchence became romantically involved with Paula Yates. He had met her in 1985, during an interview for her program, The Tube. Paula Yates interviewed Michael Hutchence again in 1994 for her Big Breakfast show, and their affair was soon uncovered by the British press. At the time, Paula was married to The Boomtown Rats' lead singer and Live Aid organiser Bob Geldof. Media scrutiny was intense, and Michael Hutchence assaulted a photographer who had followed the couple. Paula Yates' separation from Geldof in February 1995 sparked a public and at times bitter custody battle over their daughters. Yates and Geldof divorced in May 1996.
On 22nd July 1996, Paula gave birth to Michael Hutchence's only child, their daughter Heavenly Hiraani Tiger Lily Hutchence, who Paula claimed was delivered in their bathroom. Like her half-sisters, she was christened with an unusual name. Pixie chose Heavenly, Michael Hutchence picked Hiraani, and Paula provided Tiger Lily; she was called Tiger and Michael Hutchence described her as being just what we ordered.

song:'Slide Away' by Michael Hutchence