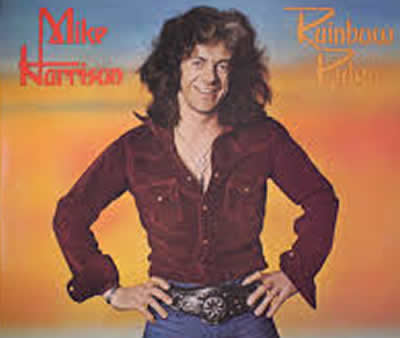 Mike Harrison was born on 3rd September 1945 in Carlisle, Cumbria, U.K. He was the principal lead singer of Spooky Tooth and also a solo artist. He was also the lead singer in The V.I.P.s, Art and the Hamburg Blues Band.
Mike Harrison's main fame came as a lead singer of Spooky Tooth, a band that he initially co-founded, with Mike Kellie, Luther Grosvenor and Greg Ridley and which Gary Wright then joined. Mike Harrison, Grosvenor, Ridley and Kellie had previously been in a Carlisle-based band called The V.I.P.s, which also included Keith Emerson. When Keith Emerson left in early 1967 to co-found The Nice, the remaining band members changed the band's name to Art and released one album in late 1967 on Island Records. Label owner Chris Blackwell took an interest in the band, encouraging them to work with Gary Wright and arranged for Jimmy Miller to be the band's producer. With the addition of Gary Wright, the band became known as Spooky Tooth, releasing four albums between 1968 and 1970 and three more albums during a 1972-1974 period. The band's sound was considered to be particularly unique in that it involved two keyboard players, Mike Harrison and Wright, whose singing style often involved alternating vocals.

Spooky Tooth first broke up in 1970, reformed in 1972 and broke up for a final time in 1974. Mike Harrison commenced a solo career in 1971 releasing two solo albums in 1971 and 1972, followed by a third in 1975. Mike Harrison then discovered that the royalties from his solo albums were being applied, without his knowledge or consent, to debts allegedly owed by Spooky Tooth to Island Records. Following the 1975 release of his album Rainbow Rider, Mike Harrison decided to leave the music industry entirely, and remained largely inactive from 1975 until 1997. The reason for his extended departure from music was primarily financial. Beyond a weekly payment from Island Records, band members received no further benefits. Instead, debts were accumulated, considered to be owed to the record company. Among other occupations, Mike Harrison worked as a barman and drove meat and milk delivery tr

Mike Harrison developed a renewed interest in music in the 1990s, resulting in the recording of three songs with original members Mike Kellie, Luther Grosvenor and Greg Ridley in 1997. Recording continued in 1998, resulting in the release of Cross Purpose in 1999, the first Spooky Tooth album in twenty-five years.
Also in 1999, Mike Harrison was offered a regular monthly engagement with the Hamburg Blues Band. This led to the release of Touch in 2001. The album featured lyrics by Pete Brown, longtime collaborator with Jack Bruce, with music by the Hamburg Blues Band and vocals by Mike Harrison.
Mike Harrison's return to music during the 1997-1999 period was followed by a 2004 reunion and tour with original Spooky Tooth members Gary Wright and Mike Kellie, which resulted in the release of the concert DVD Nomad Poets in 2007. In 2006, Mike Harrison's fourth solo album, Late Starter, was released.
Mike Harrison, Wright and Kellie continued to perform as Spooky Tooth during 2008, after which Kellie departed. Mike Harrison and Wright continued as Spooky Tooth during 2009. Mike Harrison has performed only occasionally since that time

song:'Out Of The Rain' by Mike Harrison