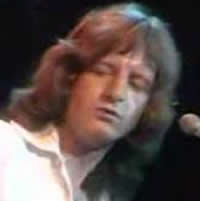 Pete Ham died aged twenty-seven on 24th April 1975 when he hung himself in his garage three days before his 28th birthday. He left a note telling his pregnant wife and her son that he loved them. It read, "I will not be allowed to love and trust everybody. This is better. Pete. PS Stan Polley is a soul-less bastard. I will take him with me."
Warner Bros. Records had sued Badfinger's business manager, Stan Polley, after an advance vanished, and after Polley disappeared, the band were left penniless. Pete Ham had believed all his money to have been lost.

Pete Ham was born in Swansea, Wales, U.K. He formed a local rock group called The Panthers in 1961. This group would undergo several name and lineup changes before it became The Iveys in 1965. The band was relocated to London by the manager, Bill Collins, in 1966, and they continued to perform for three years throu

ghout the United Kingdom. As it was, Pete Ham eventually became the prominent songwriter for the band, as a Revox tape recorder was made available by Collins to encourage him. Ray Davies of The Kinks took an initial interest in the group, although tracks produced by Davies did not surface commercially until decades later. In 1968, The Iveys came to the attention of Mal Evans , The Beatles' personal assistant, and were eventually signed to the Beatles' Apple Records label after approval from all four Beatles, who were reportedly impressed by the band's songwriting abilities.

The Iveys changed their name to Badfinger with the single release of "Come and Get It", a composition written by Paul McCartney, and it became a worldwide Top Ten hit. Pete Ham had initially protested against using a non-original to promote the band, as he had gained confidence in the group's compositions. His own creative perseverance paid off eventually, as his "No Matter What" composition became another Top Ten worldwide hit after its release in late 1970. He followed up writing two more worldwide hits with "Day After Day" and "Baby Blue".
Pete Ham's greatest songwriting success came with his co-written composition "Without You" – a worldwide number One when it was later covered by Harry Nilsson and released in 1972. The song has since become a ballad standard and is covered by hundreds of singers from many genres worldwide. An Ivor Novello award for Song of the Year was issued in 1973 along with Grammy nominations. George Harrison used Pete Ham's talents for a number of album sessions including the All Things Must Pass album and for other Apple Records artist's recordings. This friendship culminated with Pete Ham's acoustic guitar duet on "Here Comes the Sun" with Harrison at The Concert for Bangladesh in 1971, later portrayed in the theatrical film of the concert.
<<go to top>>

song: 'No Matter What' by Pete Ham