He had been suffering from emphysema for a number of years which finally caused his death.

Ric's wife Anne had died a year previously in 2012.

He was a founding member and the bass guitar player of the pop group The Dave Clark Five in the 1960's and played on the band's signature hits from an era in which they rivaled the Beatles in popularity.

Ric Huxley suffered from emphysema after years of heavy smoking.

Dave Clark was heard to say that Ric had recently been given a clean bill of health and his death had come as a shock.

He also said of Ric that they would talk once a week. and that the week before he had been in great spirits and that this news was devastati 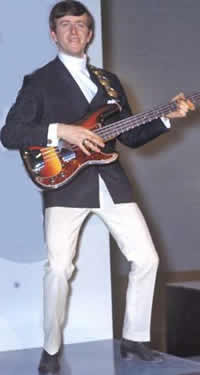 He continued that Rick was a dear friend and an immensely talented musician with an amazing sense of humour, who always made him smile.

Dave Clark also told the Press Association that Rick was a real gentleman and was very kind and had an amazing sense of humour and was the funny one in the group and a very talented musician.

Ric joined the Dave Clark Five in 1958, and played on all of the band's hits including "Glad All Over" and "Bits and Pieces".

He was, however, the only member of the group who did not write songs.

After the group disbanded in 1970, Ric Huxley pursued a career in property development but also maintained an involvement in the music business.

Ric did attend the ceremonial induction of the Dave Clark Five into the Rock and Roll Hall of Fame in March 2008.

Do you like this website? If so, then perhaps you could copy and email the link:
www.rockapaedia.com
to your friends and colleagues and aquaintances. Thankyou..